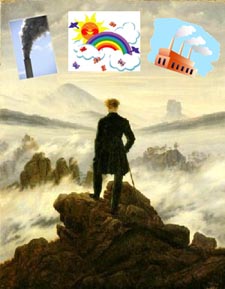 Thanks to my post on how I rival even super computers, now they're calling me Super Brain! (For completists, I also mentioned the subject here.)

Super Brain? That's quite a title! I tried to shrug it off and say no, but the acclaim has been too great, from comments here at the blog, emails, and, of course, neighbors. I'm taking the title, somewhat reluctantly, but I'll try to live up to it as best as I can.

The acclaim started rolling in about 10:15 a.m. yesterday. Most of the factories take a break about then, giving everyone a quick chance to look at the latest scoop on my blog. The emails and comments started coming immediately. The calls and actual visits built then throughout the day, with a few of them actually using the term "Super Brain." Also, the florist was here with a few deliveries. Most of the flowers I'm giving to nursing homes. The big spray spelling out "Super Brain," I'm keeping.

So, reluctantly, I guess you can call me Super Brain. Hope it fits. For one, I do rival super computers, and apparently now even other human brains. But really, I didn't ask to be this smart. It just happened. I watch Jeopardy, have filled in a few Sudoku puzzles, graduated from school, and I've read a few books. The rest is just native intelligence, the ability to spell my name, balance a checkbook, and do three step projects without reviewing the instructions.

One thing I'm already doing is a lot more thinking. But the first official act I'm going to do as Super Brain -- and I'm getting ready to do it right now -- is to scan the future as it relates to the Residential Industrial Movement (RIM), our industrial future. I know you can't see what I'm doing, but I'm alternately pausing and gazing at the wall and typing. What am I thinking? I'm not seeing anything very distinctly ... I'm focusing in ... shutting my eyes ... hoping I don't drift off, since I'm up very early.

Friends, as Super Brain I feel I can now deliver good news to you. The indicators are pointing to this one thing, and I will proclaim it. The data has been processed and the conclusions are in: I can now predict the defeat and demise of the Major Industrial Powers (MIP) within our lifetimes! That's a fact. Along with that, quite naturally, I see the security of the RIM established forever!

There's a lot of sunshine, Super Brain sees that. But, wait, what is this? I'm scanning the inside of my forehead, looking for flashes of insight, and a cloud has passed through. Meaning ... yes! ... the security of the RIM and the demise of the MIP will not come without additional challenge. I know, no one wanted to hear that, but you don't really have to be Super Brain to anticipate how that would be the case. We've been through so much already, and the MIP is not obviously staggered or fatally wounded yet, so of course there will be tough days ahead. But keep the ultimate prize in mind, which we have already glimpsed: Victory is ours!

Just for fun, I wonder how fast a super computer could've come up with this. Probably not all that fast, because it'd take a programmer longer to type in the questions and variables than it took me just to look at the wall. So, once again, I've left the super computers in the dust. Super Brain gets his work done and is taking the dog out to pee before the super computer manages to get warmed up! But I don't feel like taunting this morning ... because ...

It's a day of gladness for the RIM! We shall prevail!

Now, I know everyone will be looking for additional details, but, please, just put it out of your minds and get back to work. We shall prevail according to what our strength is, and our strength comes in our work ethic, our ability to produce quality goods in mass quantities, and in our dirt cheap prices. Fill your warehouses to capacity! Keep supply high and let demand catch up. We can't lose!

On a personal note, thank you, everyone, for the title of Super Brain. I shall wear it with honor. Super Brain has spoken!
Posted by dbkundalini at 4:34 AM