I Meet The Curse Blob 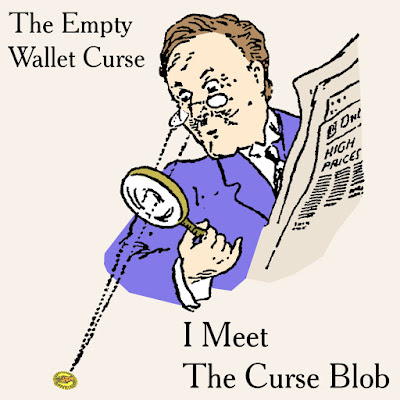 The Empty Wallet Curse took an unexpected turn when I met The Curse Blob. And it wasn't very hard to do. In fact, I didn't do a thing; suddenly he was there, at my home, revealing himself. I know now I would've never figured out the mystery, thinking of a literal blob big enough to take up the top floor of a tall building downtown.

These are the facts. He wasn't gigantic but extremely small. He glowed, that much I expected. And as it turned out, also expected, he was very powerful. All along I felt like I was in the presence of some unusual strength and majesty. Before we talked together, just seeing him, I figured he'd zap me, but he didn't.

If you've read this far without knowing what I'm talking about, let me catch you up: I posted a graphic a couple days ago called "Share This Empty Wallet." It promised/threatened that anyone who did share it would go broke in three days, adding, "It's never been known to fail." I thought it was something funny, merely funny, and shared it. Suddenly it hit me there wasn't anything especially amusing about it. Meaning, I was immediately paranoid, afraid I'd go broke. Then, indeed, my money began disappearing, both the physical money in my house and money from my credit union account.

And now, here it was, right before me, the super power behind it all, what I called The Curse Blob. But, instead, he was more like a living coin, like a burst of conscious fire. I don't even know what he is. I know he shows himself as small and/or alternately my size. His fire is non-consuming, he's quite conscious (maybe infinitely so), and speaks in a kind, benevolent tone. I was reading the paper when I heard a still small voice calling out to me, "Could we have a word?"

I about lost it, of course, but edging closer to what showed itself as a kindly presence, I regained most of my courage. Maybe this was the friend I've been looking for all these years, I didn't know. (It's true even though I don't say it very often, I've been looking for my soul double, a heart friend, a fellow super-brain, you name it. I wasn't leaping to any conclusions with this entity, but it was at least a lead.) "Pick me up," he said. I was reticent because of the tiny golden flames, but he was quick to allay my fears. "Don't be afraid, upsy-daisy."

Holding what I continued to think of as The Curse Blob, I felt a real heft in my hand, the little bugger with enough girth packed inside him, hell, for all I knew he could've been a black hole. Which, according to science documentaries, are tight as a tick, the heft of the heavens making up their substance, and are packed so densely that not even light dare hit the exits. The Curse Blob had me transfixed.

Another observation, he had a lot of runny watery slime stuff on his underside, I thought probably a cooling mechanism. But, no, it turned out he's been headquartered in my cellar, which is overly wet thanks to the rains of late. Which explained, by the way, my bathroom slippers being moist in the mornings. The Curse Blob was leaving the cellar at night, coming upstairs, and trailing cellar water everywhere. I love it when mysteries are solved!

"Could we have a word?" he repeated calmly. I was almost put off by his friendliness. "I'm here on a mission," which he got right to, "to share with you the beauties of poverty." Naturally I was put off by that, but I'll spare you all my now-boring and senseless ejaculations of umbrage and protest. Suffice to say, I objected for three solid hours with only two bathroom breaks. Finally, I broke down in tears and said yes. One, I knew the penalty for having shared the Empty Wallet graphic, that I'd go broke. Two, his description of it as "beauties" and "glories" made me think, Why not?

I also thought of some of the things I've heard about poverty -- St. Francis, Jesus, and a guy I met fresh off a freight train once -- and, in the latter case, if someone gives you free potatoes, it can't be all bad. Then there was the book by Alan Watts, "The Wisdom of Insecurity"; I once read the first few pages. I could be a totally poor guy, wandering around reading that. "Wrong," said The Curse Blob, "you will have nothing." On that we had to negotiate, with him eventually allowing me to possess the clothes I had on, my gnarly New Testament, and an empty backpack. Over time I'd be allowed to fill it, but I'd have nothing else. (All kinds of loopholes there.)

That's about it. The Curse Blob became a glowing man about my size and we shook on it. Then he vanished and I stood there watching my house disappear around me. The "curse" literally came true; I was completely broke.
Posted by dbkundalini at 2:28 PM