The Curse of The Empty Wallet 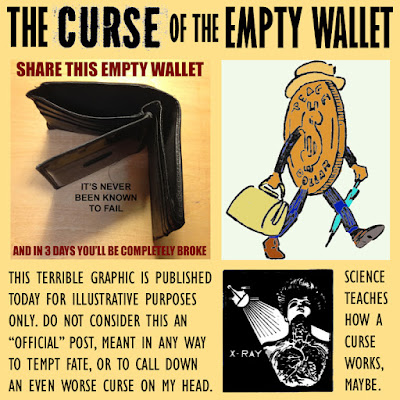 I made the mistake of sharing the "Share This Empty Wallet" graphic and now I'm beside myself with worry that I'll go broke. I was thinking it was probably just a funny graphic and that nothing would come of it. Now I'm not so sure, and my worries are real.

I'm worried because I've thought it over. There was nothing explicitly funny in the graphic. And if it's true -- about me being completely broke in three days -- there has to be some curse mechanism at work. O, if the damned thing had only said, "For Entertainment Purposes Only," I could lean on that for sweet relief! Without that, I can only conclude that the curse has power behind it, similar to carnival gypsies and psychics and the evil eye. And in three days, now two days, my considerable fortune, in the lower thousands, will be wiped out...

There's always the possibility that I could find someone with the power to reverse the curse. But for that much power I might have to spend everything I've got, which would be the same as letting the curse take its course. Hell, I might be able to muster the power to reverse it myself; I'm one of the few humor bloggers in history to have performed a successful exorcism. But there's always the argument that the exorcism was for someone else, whereas in this matter I have full self-interest.

Still, I might study it out -- in knowledge there's power, in power deliverance -- and find some way of reversing it. What if I "gave" all my money to charity, then had most of it given back to me afterward? There wasn't any curse in the Ice Bucket Challenge. I bet I pledged $10,000 and did the Challenge 50 times, and didn't send in a dime. I came out of that OK. In that case there was safety in numbers. This empty wallet thing might've targeted only me, or a select group of Ice Bucket scalawags, let's say. My ignorance is killing me!

How does a curse like this work? Maybe science offers clues. We have X-ray machines that are able to see right through you. The curse could work similarly. It's lurking nearby, sees that you posted its graphic, then latches on to something in your head. Time is ticking away while it holds on, never losing track of its poor victim. It could be latched on to a particular identifier in the brain, such as the particular shade of gray your gray matter is. That's insidious! Were I then to blend in with even a million people going through the turnstiles to safety, it'd pick out my shade of gray and pull me over.

Of course that means there's something extremely conscious about the curse. It has to be like a powerful brain. If I had to guess, it'd likely be on the top floor of the tallest building in town, radiating out, radiating in. On the other hand, maybe it's so powerful, and even likes to show off, meaning it'd likely be in the basement of the shortest building in town! Its power wouldn't even have to be greater than mine, as it knows I'm lending it needed power through my worry.

Quite the racket it's got! It gets money -- my hard-earned money -- merely by posting a stupid graphic that any kidder like me would naturally share. How am I supposed to know it's serious? I'm not, so I post it, then I start thinking. And that's where it entangles me. Now I'm worried, and it's sitting there in the basement going, "Gimme gimme gimme..." Bastard! That's stealing! If this psychic technology slips into the clutches of the Republican Party we're done for. They could have a large progressive message for us to share, but in small print the curse. And the rest is history.

I'd like to know the evil scientist who came up with this. I'd love to go over and stomp in his damned face. Except there's always one little fly in the ointment: Anyone evil enough, insidious enough, to do such a thing would also have powerful defenses. There would be posters everywhere down the hall leading to his headquarters, cursing you left and right. "If you can read this, your mother will cheat on your dad," and so forth. A guy gets home and his mom's in bed with the mailman just as his dad also walks in. "What the hell's going on here!?" Dad bellows. The son takes him aside and confesses, "It's my fault, Dad, I caught an inadvertent glimpse of a cursed poster," like that's a credible excuse for Mom.

OK, I should mention one other problem. I'm already missing some money, meaning the curse is progressive. It's not waiting three days. Coincidental to all this curse business, I had a few of the newest "likers" of my Facebook page of Grandma Slump over to the house last night. They shared a 12-pack of beer, then a few of them had to go in my room to use the toilet. Long story short, I go into my room after everyone's gone and all the change on my dresser's gone. Including all the 1897 coins Grandpa gave me decades ago!

I haven't checked my bank accounts yet, which are online. Frankly, I'm afraid to log-in, since any system smart enough to carry out a curse across town ... is just waiting for me to log-in to the bank. But, if it's already read my mind about the accounts, the money might be dwindling away or even entirely gone. I'm in a fix. I can't log-in to see if I'm saved or damned. I'm dangling helplessly over Financial Ruin Hell!

I still have the power, I hope, to get through to the rest of you. You now know about the "Empty Wallet" curse. If you don't want to lose your money, I implore you, don't share the damned graphic. Take a lesson from me. Look, the veins are bulging out on my neck, that's how distraught I am.
Posted by dbkundalini at 3:09 PM