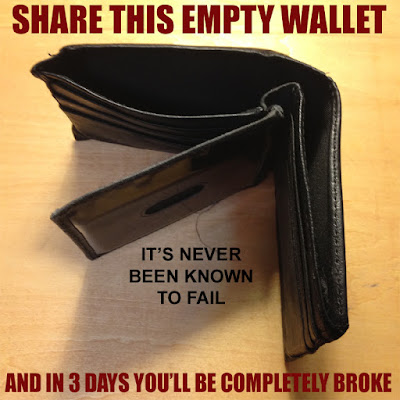 I've never been what you might call overly superstitious. It's not something I worry about, like stepping on cracks, walking under ladders, or washing my hands before meals. And all in all, I guess I've been pretty lucky. I have the same amount of problems as the average guy my age, 62 -- occasional cancer scares and all the rest -- but absolutely nothing out of the ordinary.

Usually I simply avoid every come-on of this nature. We used to get them in the mail, chain letters that needed to be passed on ... or else. I never passed on a single one. Now I see them on Facebook all the damned time, making me wonder about the "quiet desperation" that is said to be the sad lot of the common person. I believe it.

But the basic thing on Facebook I'm thinking of is a picture of a large amount of money, with the promise that, if you share it, in a few days you'll have the same money. It'll just appear from ... somewhere, they never say where. A wad as thick as what they show, though, it'd have to have fallen out of an armored car, being too thick and fat to have been in someone's pocket. OK, I ignore all that, I never share them, and I really don't give them a second thought.

I saw this newest one the other day -- seen above -- and it's just the opposite, promising (or threatening) complete poverty, and apparently whoever put it on is completely serious. Because it isn't something that's immediately desirable. I can't imagine there's been even 20 people who've shared it, whereas the wad of money pic likely gets thousands of shares. It's not in our ordinary desires to be completely broke. That's a tough one. Yet there it is!

Thinking about it, I notice, it's not a threat. No one's twisting your arm. It doesn't suggest some weird thing like, "You saw it, now you must act or else." And certainly it's not a promise of something, but of nothing. Looking deeper, there's the scary fact that there isn't any pardon for sharing but then changing your mind. Once it's shared, in three days you will be completely broke. There isn't even a chance of it failing: "It's never been known to fail." Although, I can see an off chance that it could fail; past performance doesn't guarantee future results. Has it worked a million times, 40 times, or just a few times? That'd be good to know.

OK, here's the thing. I'm not filthy rich, although I've always had enough money to do all right. And, yes, like everyone else with security, I'm comfortable in it and never really expecting it to go away. But sometimes -- I hope you see my point here -- even complete security gets a little old. What if I were to be stripped of everything? How would I cope? It's kind of tempting to share it, even though that line "It's never been known to fail" is off-putting. Maybe I'll be the world's first exception! I've had good fortune, is there actually any dark force that could take it away?

But even without a dark force, should anyone tempt fate? This is a tough one.

I hope this isn't the work of some old sinless magician, I really do. I can picture him now, in the tower of a gnarly castle, poring over his magic books by candlelight. He has a small bowl of water, completely still, except when some deluded soul shares his empty wallet. Then there's a rippling, even a boiling, and the bowl empties downward even without a hole. The old man then slowly turns the pages of an enormous dusty tome with his long dirty fingernails. He comes to the page with my name and picture at the top. He thrusts his arm out the castle window in my general direction. Lightning and thunder. In three days, I'm completely broke.

Heh heh, I'm not going to share it, screw it! Oh, no, what am I saying? It's right at the top of this post! It's already been shared! Now it's too late!
Posted by dbkundalini at 10:09 PM