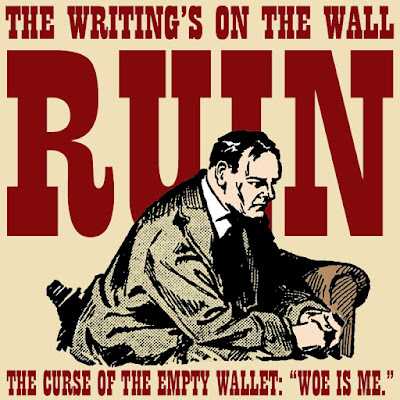 How could I have been so stupid! On a lark, to have shared the cursed "Share This Empty Wallet" graphic. It guaranteed financial devastation, but I didn't know the damned thing was true. Now I know, but it's too late. Everywhere I look, no matter where I go, what I do, I'm in ruins. The curse is too much for me.

Woe is me, me, who until a couple days ago didn't have an atypical care in the world. Now my worries and woes are extraordinary, one big singular mess. Because my money is vanishing, evaporating, withering away, all at once. Believe me, once my wallet had true girth, now it's frail, dessicated, entirely puny. Another day like this and I won't have a cent to my name. And I'm too proud to dive in dumpsters. I might have to build rabbit traps like we used to just to survive. This damned curse...

I checked my account, $2,000 is gone -- Poof! -- with not much left remaining, around a thousand. If only I could zero in on the curse beam! The perfect conclusion would be to go there, face down a hundred storm troopers in the hallways, then burst in on the blob and have it out in one final slimy offensive. "Take my money, you greedy beaming ectoplasm? I'll send you back to hell from whence you come!" That's a vain fantasy...

I don't even know for sure where the beam's coming from. Although I felt more zapped when I turned north. That told me something, until I realized it was just wishful thinking. For soon I was feeling more zapped from the south, west, and east, take your pick. Either wishful thinking or ... could the thing be omnidirectional? That'd make it potentially divine, perhaps literally from hell. But surely the nature of existence isn't one big joke, curses of empty wallets...

I still think the thing has to be at the top of the tallest building in town. That makes a lot of sense. But just as likely, it could be coming from the basement somewhere, or even underground. The air, the earth, it's all the same; each obviously would make a terrific carrier for a decently powered curse beam. These are thing I've known all along, so why would I toy with a curse like this, "The Empty Wallet"? My playfulness got the best of me, I foolishly forgot how life has millions of consequences. You can't play in traffic, as an example.

One terrible idea I had was a variation on the "safety in numbers" theory. Which doesn't say much about my morals or compassion. What if I tricked more people into posting the graphic? While they'd be suffering miserably, the beam likely would lessen its hold on me. I decided against it in the end. Not out of goodness, but there simply isn't enough time to do it right; my money's quickly going down the drain. I'll need others to have money in case I'm reduced to theft.

At the very least, typing this isn't a waste of time. I need to leave some record of what's going on, in case the beam has deadly consequences. If I'm found penniless and dead, this is why. Financial ruin, let me tell you, isn't much fun. My eyes, once so merry when I was romping in the green, are now bloodshot, my sockets sunken, the eyeballs naked to the world, bug-eyed. I'm a mess from the top of my gnarly head to the bottom of my wet slippers. I must've sweat up a storm last night, tossing and turning. I literally could die.

Let me say something meaningful, and I hope powerful. This goes out to the curse itself: "Curse, I curse you! You big fat, money-sucking amorphous blob, I know you're out there, pulsating, glowing, and voracious, with only one focus -- not for good -- money-sucking. All day, everyday, for eternal moments, with no real destination, no real need, just exercising your supposed prerogative, sucking, sucking, sucking the money of people stupid like me. You can choke on it, you bastard!"

If I die from this curse, someone please see that my gravestone has etched in it one word and one word only, "RUIN."
Posted by dbkundalini at 9:46 AM