Life's A Bitch, A Real Bastard 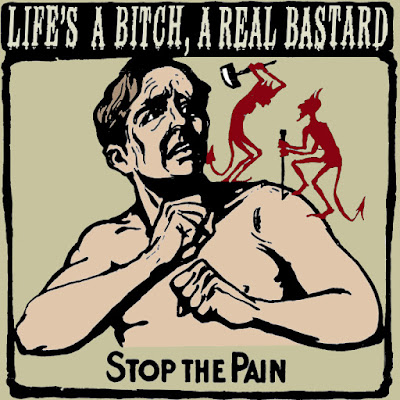 It's been a tough few days, like an eternity of torment, ever since I was stupid enough to share the Empty Wallet graphic and lose my money, my house, and my life to The Curse Blob. Hell, I even lost my garage! If there's a plus side, I've seen how tough life can be, and I'm ready for it to quit. Get me back to normal!

Here's what I've concluded: I've personally suffered more than any other person alive now or anyone who's ever lived. Were I held down, depantsed, and tickled till I peed straight up, it couldn't be any worse. I've cried out to whatever gods there are or that may have ever existed, "Kill me, kill me now," but life's a crap shoot, it goes on like it or not. I'll tell you one thing, if I ever get out of this mess, I'll be selling T-shirts that say "Life's a bitch, a real bastard." Don't anyone steal that line -- it's my copyright -- and I believe that's how I'm going to pay for retirement.

As it is right this minute, though, those plans are for a day hopefully still to come. As things stand now, I'm in the depths of depression, the slough of despond, and the pits of p-- rottenness. With no way up, no way out. Are there others around me? Yes, but their suffering doesn't appear to be as great. Even in the muck and mire of hellish torment, at least they're still rolling around, enjoying the fleeting pleasures of one another's bodies. I guess it's pleasure, but I for one am not going to add disease to my current misery. That's how I've always been.

One thing that's beneficial, I guess, is I've been able to see how others live. To think I used to sit and stew that my house wasn't as good as other people's. Now, if I could have my old rundown place back -- it's last major maintenance having been performed in the mid '70s before Grandpa died -- I'd feel like a king in a well-maintained palace, various workers tilling the soil and bringing me radishes and an occasional quart of blackberries. This life is for the birds, sleeping outside, under bridges, and the horrible noises of others all around, disturbing the peace.

That's right. I made my way over by the railroad tracks, where they go around the corner near all those trees. I got a tip that's where you go -- a guy at a bar told me about those who live this sort of life. I showed up and every eye turned to examine me. Was I a railroad dick? Was I some authority? My gray hair sticking down from my cap and covering my ears, I must have looked quite distinguished, and, yes, perhaps like an authority from one of the governing boards. The ragged people scatter when authority arrives, because they're usually flashing nightsticks when they do.

But I held my hat meekly and sought admission in the gentlest of terms, appearing quite abashed to be needing a handout from those already down. But no matter how far down people fall, they come up with something to feel proud about, even if it's only giving suspicious glances to some other bastard who's descended into their camp. Would I pass muster? I didn't know, and in a way I didn't care. I do OK on my own, but if you're accepted into a camp like this, it's more likely you'll have something to eat. There's a couple kids they send out to steal stuff from the man. The man that runs the roadside stand three blocks away.

Nighttime's the worst time to be in a community like this. People saying random crap, like one guy who keeps going, "Oh, forget it! Forget it!" Then there's the snot-nosed kids, crying all the time and banging the railroad signs with their sticks. Too much stuff like this. This is where my grief would be greatest, except when I first got here it didn't take long till I sneaked out. I don't mean to give any indication that people care if you're here or not. But if I'm with people, I like to honor the relationship. This time I put up with it as long as I could, then stashed my stuff under my arm and left. I found a fairly decent culvert down the line and boarded there. I plan to go back when I figure the kids are back with the man's food.