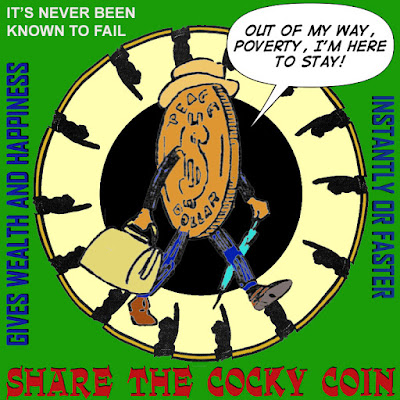 Yea! The story of me being cast into poverty and deprived of property has a happy ending! All is restored, all is right in my cozy little world! Thanks to the very real power behind miracle graphics like this great one, "Share the Cocky Coin." The Cocky Coin struts into view, everyone looking, everyone's pointing, "He's the man. A dollar that knows his worth. Gives wealth and happiness. And never been known to fail."

My troubles started in a similar way, but with the blessing reversed into a curse, when I foolishly posted the "Share This Empty Wallet" graphic. At that time you could've called me a skeptic, a non-believer in the various Facebook posts people make. Share pictures of wads of money and you'll have money, all that. But as I found, to my regret, there's actually something real going on there. The Empty Wallet graphic wiped me out. I lost my house, my garage, and 99% of my possessions, quickly, just like that.

In poverty then, it's remarkable that I didn't think of immediately counteracting it with a money-making graphic. Although it's entirely likely that the Curse Blob, the power behind these graphics, wouldn't have blessed me. It's more likely he clouds your mind to that possibility until, in the negative case, he's dealt you some destruction. Otherwise, as is easy to see, people would be trifling with him like an on-off switch. Still, he's apparently a lot more into blessing than cursing, since "getting money" graphics far outnumber those taking it away.

Whether there was any clouding of my mind that went on, I don't know, except in my experience I felt like I was kind of in a haze. But with the passing of time I really set my mind to making things better. Which led to my Elvis Presley pilgrimage, all the way to Mobile, AL. Frankly, I thought that would instantly restore my property. It didn't, although it turned out to be an important step in clearing my mind -- giving me Elvis-like powers to think it through -- which then opened my mind/heart to sharing the Cocky Coin.

How many times have I seen the Cocky Coin graphic on Facebook? Hundreds of times! Not necessarily from people who went from riches to poverty, but from those already in poverty. But I didn't know their experience. So I ignored it. This time, my mind completely cleared, and also blessed by Elvis, I shared it, then stood back ... and watched in awe.

OK, you have to picture this. I'm on the half acre of land I inherited from Grandma and Grandpa. The garage is gone, the house is gone. All I can see is a big patch of bare space where the house used to be, along with a hole for the cellar (not taking up the entire foundation). I shared the Cocky Coin on a neighbor's computer and rushed back across the road. What I saw next, you won't believe. But every word is true.

There was such a swirling of energy over the site, I nearly had to close my eyes in the glory of a presence. And dust. It was noisy, there was shaking, and everything started coming together, this piece to that piece, materials appearing and joining themselves. I beheld walls appearing from nowhere, and pictures on the walls and furniture. The covering of the outside of the walls and the roof and its covering came into view. It was like sinews and skin forming. I literally held my breath in fear. Behind me the garage assembled itself in seconds. And not to be outdone, although presenting a more humble spectacle, my old shed reappeared, as shabby as ever.

I went into the house and everything I had lost was restored, including my computer. But nothing seemed especially improved. The SHIFT key on my HP computer, which broke off less than a month after I got it, was still missing. Pretty good computer design, HP -- Huge Piece of crap. The Curse Blob, now the Blessing Blob, had a sense of humor there. But he was more gracious with the meat in my freezer. Nearly everything previously freezer burnt was immaculate and delicious-looking!

I checked my credit union accounts online. What previously was zeroed-out was restored, just as though nothing had happened.

WHAT THE CURSE BLOB MIGHT
HAVE SAID HAD HE SAID ANYTHING

Now I call you, neighbors, to rejoice with me! I'm a very good person, there's no question of that. I deserve everything I have. And I have learned my lesson once and for all: Whenever I'm not happy with what I have, I know where to get more.
Posted by dbkundalini at 8:51 PM