My First Day in Poverty 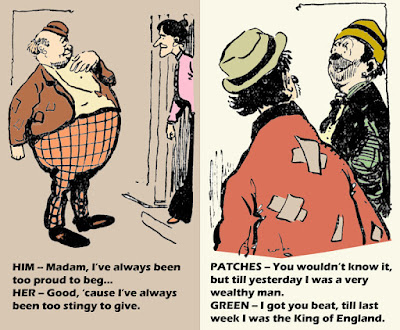 Like Patches in the old cartoon panel "Patches & Green," literally till yesterday I had enough money to get along pretty well. I wasn't wealthy, exactly, but I was never hurting. Then came Share This Empty Wallet, topped off by The Curse Blob taking away everything I had, even to the point of disintegrating my house, garage, and car. It's been a tough few days, with me ending up with nothing.

Basically nothing. I have a gnarly New Testament, the clothes I was wearing, and an empty backpack. I'm allowed to scrounge here and there, wherever I happen to be, and fill the backpack to my heart's content. This is all at the allowance of The Curse Blob, the power behind The Empty Wallet curse. By sharing that damned graphic, in three days I went completely broke, just as it said.

This also means my computer's gone, you understand. Meaning, I'm using the computers at the library, and their graphics capabilities suck. It took me twice as long to make pix for this post, and even then the cartoons are basically lifted from other guy's site, with a few changes on the captions. If you know him, don't rat me out.

But of course I have bigger problems. It's damned tough to live in total poverty. I don't have a single cent, this is serious. You might think it's romantic to wander the streets, looking for bits of a sandwich here or there. It's not how you imagine it at all. Finding a place to sleep, having nothing, is also tricky. But I have some experience with that from back in the '70s when I used to hitchhike around the country.

So it was the same last night as it was back then, I went out to the interstate and slept under one of the bridges. Wasn't too bad, about like I remember. I stuffed some weeds in my backpack and that was a good pillow. But I didn't have anything to cover up with. And just as I remember, it's always around 4 a.m. when it gets coldest. The biggest difference is now I'm 40+ years older. I was a kid then and looked cool like Tom Sawyer. Now I must look as pathetic as usual, only worse.

Since the interstate's just south of where I used to live, it wasn't tough getting there. Then today when I went back into town I surveyed my home place, looking for something that might've escaped the devastation. The Curse Blob was very thorough. I couldn't have cleaned the place out any better if I'd had Service Master out. Or maid service for a year, like they sometimes give away on The Price is Right.

No TV, so I won't be seeing Price is Right much till I stumble across an episode somewhere already in progress. I'll check the hotel lobbies. It could be -- you know, if I played this thing smart -- I might do a little work, like at Manpower, and get a little money. I've always been a hard worker, although I've taken it easy in recent years, getting disability because of my game toe. But I can still work, I'm not too proud. Then, let's say, I do manage to get a little money, I'll hit the antique stores, find something to put online, and I'll be back in the green in no time.

Unless, and this is a very real possibility, The Curse Blob isn't done with me. It could be this poverty thing is my reality for the foreseeable future. He's probably watching me right now, knowing what I'm scheming. I'm looking around the library. Nobody seems to be paying close attention to me. I feel smelly, maybe that's why; they're giving me wide berth. I didn't get my daily shower this morning. And these pants I was already wearing for four or five days. Fortunately the undies were fresh yesterday morning.

Anyway, whatever, I'm sure it's like anything else -- being dirt poor -- you get used to it. I've always been good acclimating in life, I suppose, not that I'm bragging. I've had very little a few times, and I've had a lot. But I never actually had nothing. Still, as terrible as it is, don't get me wrong, it's not without its fascination. The food thing's the worst. I think I'm going to need to hit some cans and find something decent.

Remember, when you got nothing, you got nothing to lose. I'm going to play this eating out of cans thing very smart. None of my usual pickiness. I'm willing to take what I find and make the best of it. Same as when I used to hitchhike, even though I always had a little money taped to my leg, since some of the rides were bastards.

The old library marm's looking at me. I guess my hour's about up. I wasted too much time on the cartoons, so I've been typing this thing like crazy. I'm not too sure they like to see ragged people in here a lot, which now includes me. Still, I'm not like the guy across the room, slumped on the bench and dozed off. Where's your pride, man?
Posted by dbkundalini at 4:59 PM