Ahh, the glories of morning with dew on the grass, when your thoughts are at their clearest and great ideas are low hanging fruit. You know, I really could change the world for the better and they would erect big statues to me, which I wouldn't really want (maybe just one, in the park near my home). "Local Man Changes World For Better." That's a nice headline.

I said I wouldn't really want statues to me and that's true. That would conflict with my conviction that glory is useless. I'm not really seeking glory through statues, being Grand Marshall of the parade, special newspaper editions, commemorative coins or plates, laminated bookmarks with my more famous quotations, a movie of the week, or even a wooden historical marker and tiny driveway offset from the road for sightseers.

What would I do then? I'd have to comb my hair every morning before stepping out with a mouse from the trap to fling it in the road. I'd need to side the house and spruce up the place. Because appearances can be deceiving. How can someone who changed the world live in such an ordinary looking house? Just because Abraham Lincoln came from squalor and did so well doesn't mean the rest of us can expect the same luxury. 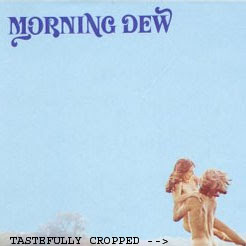 I'd have families out there with their Instamatics -- Mom, Dad, their twin boys, and their slightly older daughter, of age but still not quite out of the house, Vanessa, who didn't even want to get out of the car to see another idiotic landmark but had to. She stands about 5 foot 4, cute strawberry blonde hair pulled back, breezy top, blue jean shorts, black boots up to her shins, pouty red lips, and she refuses to turn off her transistor radio. I'm standing on the north porch, ostensibly knocking down cobwebs with my broom but in truth I'm transfixed at the sight. Everything about my eyes goes gauzy and it's not just the cobwebs in my face. I can see us frolicking in a field, like the picture on the first Morning Dew album. I'm celebrating her existence by singing "Strawberry Girl" by Tommy Boyce and Bobby Hart.

Vanessa looks up at me. Our eyes meet for the first time, and it's like we're suddenly in a beautiful garden, with Donovan behind us there in the weeds, gently strumming his guitar and singing "Wear Your Love Like Heaven." Eventually we marry, the twins go to school, Mom gets a job at Mode-a-Day, Dad becomes our handyman, Donovan stays, marries Grandma and becomes my step-grandfather. We live off his royalties, Mom's dress shop pay, and my disability checks (I have a game toe). Vanessa and I can barely leave our honeymoon citadel. In honor of the 40th anniversary of Apollo 11, I might say, the first time anyway, "Tranquility Base here. The Eagle has landed."

But, setting all that aside, I can't act on any of my great ideas to change the world -- for one big stupid reason, I'm on hiatus. I've got time off, time to kill, and that's my lot in life. But, you know, there's something else I just might kill, and that's my hiatus itself. It's stunting me, drying up all my moss. It's got me surrounded, hemmed in on every side. I'm not its master but its victim! I gave it life ... and now I'm afraid it's up to me to take its life away.

But how? My weapons it's hidden. Knives, swords, clubs, guns, my complete arsenal. The hiatus -- in its blob form -- has enveloped my weapons, knowing my plans. (It seems I have at least one reader.) The only deadly weapon in the house is the rolling pin, and it's doubtful that could do much damage to a shapeshifting blob. It'd be like striking a beanbag chair. Or a sponge, which would only spring back spongier than before.

I do have one idea that I think could very well get the job done. But I need the day to think it over. My first thought is that it just might work!
Posted by dbkundalini at 7:34 AM