Are You More Important Than A Pizza? 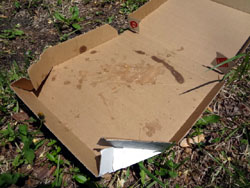 It's an interesting question, isn't it? ... Are you more important than a pizza? I hear a question like that and it really makes me think.

A question like that comes to me because I think a pizza is a pretty important thing. It costs quite a bit of money for one. You take good care of it in the car on the way home. And if you went to the pizza place and robbed them with a gun, they'd put you away for a long time.

I've bought a few pizzas in the last few days. I get carryout only because I don't like to pay fees and tips for delivery. That shows a pizza's importance, they'll even bring it to you. Since I get it carryout, my going there, risking my life in traffic and spending gas money, shows its importance.

When I get one, it's for my appetite, which is important. Whether I eat and live or starve and die is important, and nothing takes care of that need like a pizza. And a pizza rewards your attention by making sure its first few slices are always the best. Then the less there is, the less important the pizza feels, and so it starts rotting on the vine. Just a few pieces in the box, especially if they're separated, are almost like poison. You should eat pizza fast; a pizza's resentment is not something to tempt.

I've demonstrated the importance of a pizza. And yet how many times do I see commercials -- like I saw one today -- where there's a bunch of party-goers, usually sports fans, who'll have the generic pizza boxes up on the table, mixed in with everything else, like it's just so much garbage! The people are laughing it up, acting very loose, with little regard for the pizza. As far as I know, they're not even thinking of it, except as a bit of cooling food in a junk cardboard box. Putting a drooping slice in their big fat laughing mouth. Probably have horse teeth.

These people, the ones I saw, I had contempt for. To me, they're not more important than a pizza; I'm thinking of an old fashioned term of derision, Philistines.

Next time you get a pizza, beware!
Posted by dbkundalini at 12:42 PM