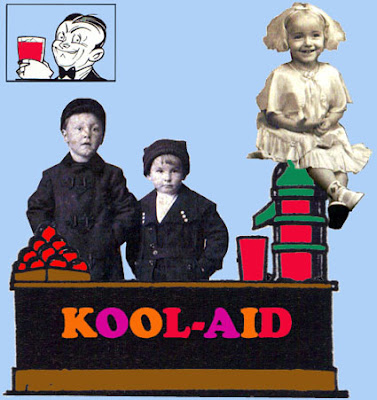 It's a hot day, and driving along I saw a Kool-Aid stand manned by some kids. Poor deluded little entrepreneurs, I thought, since I remember making one of my first dimes selling Kool-Aid, and I think so far I'm up to about 35 cents for my lifetime.

But hope springs eternal, I thought, until later I found out how truly well off they were. They made it big-time.

It's tough these days to watch children do anything because everyone's so suspicious. My own intentions in life, however, of course, are entirely beneficent. When it comes to people watching, you're really leaving out half the human race if you leave out children. Or a quarter, since they're so small. But I like to watch kids to the degree that I'm able, for many reasons. One, it reminds me of my own darling memories as a child. It's great to feel everything revolve around you personally. That's one of the things I like to try to maintain as much as possible, but it's tough, because I'm old enough to know the truth about the way the world revolves.

Like I said, everyone's suspicious. It would be hard for me to go up to a Kool-Aid stand just out of the blue these days, lest the parents come running out with a machete. Because, let's face it, anyone who shows up at a Kool-Aid stand, really, there has to be something wrong with them. I remember back when I made some of my 35 cents, 25 cents of that was from some guy who was obviously doing us a favor, but we figured his money was as good as anyone's. That was way before all the current suspicions. Back then we knew how to take care of ourselves.

In this particular instance, for me to get this story, I had to employ a stratagem. I carry in my car a Big Ear like you see at football games and a pair of binoculars. I parked about a block away, then sneaked around some houses on the opposite side of the road, came through a narrow lane between houses, and shimmied up a tree, mostly hidden. It was good enough to give me a great view of their stand.

Pretty soon, an old guy showed up, like clockwork. But this guy was different. There was already something wrong with him. He seemed to be mistaking their Kool-Aid stand for a strange open-bar or neighborhood party. He pulled up one of their little stools, put a ten dollar bill on the table, and said, "Leave the pitcher."

The kids had little else to do but sit there watching him serve himself, with the little girl periodically running to the house for another pitcher and the boys collecting the ten dollar bills. The old man was telling his troubles to the kids like they were bartenders, something about his wife kicking him out of the house and taking custody of all their drinks. He was sick of the old battleaxe and very thirsty.

I said something above about parents being suspicious. But these kids' didn't seem to be. The little girl, while inside, must have alerted them to the man's profligate ways, because I saw them -- the mom and dad -- alternating at the front window, pointing and laughing. The mom seemed the more boisterous of the two, slapping her knee each time another ten dollar bill made its appearance. The dad only made sly calculations in his head.

I watched attentively as the man finished off the fourth pitcher, then was apparently so drunk he could barely get off the stool. One sign of his perceived (imaginary?) drunkenness was, he pointed to his own car, the only car on the block, and thought it was a only one car among many. "Which one is my car?" Then he stood up to walk to it and staggered and fell off the curb. I know that alcoholic humor is totally out these days, but I couldn't help laughing, since it was obviously nothing but Kool-Aid.

After a while, thinking the coast was clear, I shimmied back down the tree and walked across the road with my binoculars around my neck and my Big Ear accidentally still plugged in my ears. The kids told me it was $10 a pitcher and about broke my eardrums.
Posted by dbkundalini at 3:51 PM