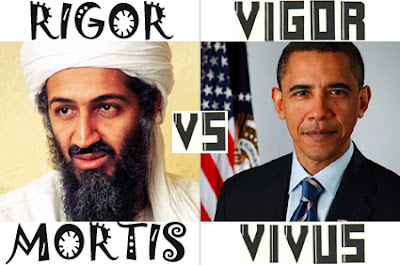 We've seen in the breaking news of the last few days this exact match up being played out on the international stage. We've witnessed the turn of historic events, with Osama bin Laden being brought down like the Towers he attacked so long ago. It was justice in its rawest form, the big, bad, mighty terrorist getting a taste of his own medicine -- How About Them Bullets?! To the face, to the chest! Not so powerful now, are ya?! LOL!

It's true, pure and simply true, Osama bin Laden lived for death, meaning he had to taste death in an ignoble way, with our finest Navy SEALS putting the deathly kibosh on him and his best laid plans. Am I sorry to see the son of a bitch go? Don't count on it! LOL. I seriously would've loved to see it myself, say I was hidden safely behind a big pane of bulletproof glass, with a safe egress out the back way, somehow avoiding all danger. I could've been the government's civilian witness, fist-pumping my way out of there on the helicopter, and holding the bloody bullet that went through his left eye which the SEALS plucked from the wall and gave me as a souvenir.

I would present that bullet here as a living witness to the ways of Rigor Mortis, the life of death, lived out in its most miserable display, the life of these scurvy, piss-ant terrorists. If I had a roomful of them, and knew they were guilty of heinous offenses, I'd love to flip the switch on each one. Let them sizzle, let them fry, and say, "You lived the life of Rigor Mortis, rejecting the ways of Vigor Vivus (true life in its most vigorous spirit), and now you must receive your own, the death you have so craved!"

The biggest trouble with bin Laden's death, in my Vigor Vivus opinion, is that it took so long. The day that son of a bitch took credit for 9/11 was the day of his death. Should've been. But we had a bunch of foolhardy Rigor Mortis leaders here in the United States, George W. Bush, Dick Cheney, and the rest of their whole life-denying, anti-Vigor Vivus crew. Even the good guys (Colin Powell) succumbed to the Rigor Mortis way, at least temporarily, when he lied his socks off at the United Nations. So naturally they didn't catch bin Laden.

Remember right at the beginning of the Afghanistan war. We had bin Laden trapped in a Rigor Mortis cave called Tora Bora. And Geraldo Rivera was standing right outside, saying it was a matter of hours before they'd haul him out. Well, hours became years, and George Bush and his Rigor Mortis team squandered the whole thing, screwed up, fucked up, and let us down. The only time they cared JACK about their Rigor Mortis buddy bin Laden was when they could score electoral points by boogy-manning the nation. So we had the Red Alert, Orange Alert, Idiot Alert, whatever it was called, and, in a decidedly Rigor Mortis move, they had us duct-taping ourselves in our homes. I still know Rigor Mortis families who haven't come out of their duct-taped room. They're probably dead by now, in actuality, sadly.

Well, enough about Bush, Cheney, and the rest of the death-cravers. They were worthless for our nation and the world, and probably set us back a century. To think anyone was filled with enough Rigor Mortis to vote for these Anti-Saints of the Walking Dead is beyond me. But of course I'm filled with Vigor Vivus. Death has no grip on me or my spirit. I'm an American in the truest sense of the word, Vigor Vivus all the way!

And that's why I'm so happy that we now have a President with a Spine of Steel, a Brain of Pure Intellect, and a Heart of Gold to lead us. He is a constant inspiration to me, and I believe I can speak for the world, for the world. The man has leadership skills that no Republican has ever known. And don't get me started on Ronald Reagan, the Rigor Mortis party's sainted knight. I was an adult and alive -- and full of Vigor Vivus -- in the days of Ronald Reagan. That man sucked royally as president at the time, and no amount of Rigor Mortis revisionism is going to rehabilitate (or habilitate in the first place) that loser. Never! Whether he was the Antichrist or not, I'm revising my take on that, but if not, they were at least on a first name basis.

Today we are fortunate enough to have a Vigor Vivus president indeed, President Barack H. Obama, who truly does have a Vigor Vivus heart of gold. And that's how he was able to take on Osama bin Laden and bring him to justice, or take justice to him. It was methodical, rigorous, the training was done, the intelligence was real, they had it down in a precise way, with coordinates you could depend on, they anticipated problems and planned for alternatives, they kept it under wraps, and they executed it to perfection. It was brains and brawn from the top right down to the heroes who had boots on the ground, putting a gun in bin Laden's Rigor Mortis face.

That's what happens, my friends, when Vigor Vivus is unleashed in the face of Rigor Mortis. You know Bush couldn't have done it. Too many screw-ups when you don't start with an actual brain. And if you've got Rigor Mortis yourself as your driving instinct, it's tough to kill Rigor Mortis. Did they get Saddam Hussein? Yes, he was in a particular place, with no Army, Navy, Air Force, Pea Shooters, WMD, nothing. Everything evaporated as soon as we went in. It was a matter of looking for the right hole and pulling him out. And I give credit to our heroes on the ground, who did it bravely despite the fact that the Commander-in-Chief at the time was Rigor Mortis incarnate.

The thought of those bullets going into bin Laden's chest and left eye ... I'd love to slow the film down, like on one of those Science Channel videos, where you can see the water balloon exploding all around its circumference stretched out over eight to 10 seconds. A bullet touches the perimeter, then makes its eight to 10 second journey through the heart of that wet space, emerging out the other side. The balloon goes completely haywire, and the water's beside itself: "Do I fall, do I drain? What?!" To see, especially, the bullet going into bin Laden's left eye like that, in slow motion, with the still-forming look of painful contortion on his face, then emerging out the back and embedding itself in the wall, what a beautiful, wonderful sight that'd be!

And to know that Vigor Vivus has won again! Hallelujah! I would stand behind the bulletproof glass cheering, and that is why the SEAL would take the extra time to pick it out of the plaster and give it to me. Because he would know the man who was on the side of Vigor Vivus all the while, me. Me and Barack Obama.

If Barack Obama isn't reelected in a landslide, we'll know that to a certain extent, Rigor Mortis has still got a grip on our nation. That's what the Rigor Mortis Republicans hope for. But if it turns out as I fully expect, that he gets close to 100% of the vote, we will know that Vigor Vivus is staking out a New Day, giving us the Next American Century, a century in which Vigor Vivus will fully blossom and be shared, not just internationally but around the world.
Posted by dbkundalini at 4:07 PM