Grandpa's Toiletries Kit From The '60s 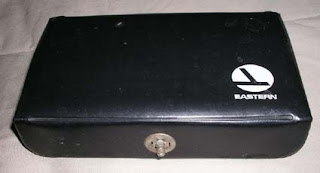 I recently ran across Grandpa's old toiletries kit from the '60s. I think he got it that time he took the plane trip. It brings back a lot of indistinct memories for me. I remember he went up in the clouds, like Elton John's "Daniel," then after a while he came back. It could be, like in the Family Circus, that Grandpas spend time together up in the nether regions, that way (pointing up).

Ever since he died, of course he's had a lot of time to exist up on the clouds in a Phantom Zone, transparent, black and white, thin lines around the edges, form. That's Paradise for you, an eternity without the toiletries items you left behind on Earth. Certainly if he could've taken them with him, he would've. 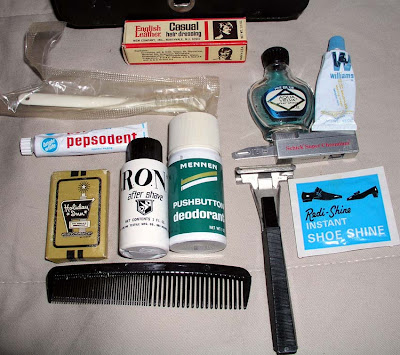 It's actually nice for me, in an esoteric way, of finding old physical items like this from Grandpa's past. It gives me a living connection to the old bird himself. And the other reason is a lot more esoteric, that physical things somehow manage to maintain their form years after you last saw them. I haven't quite given up my childhood thoughts that things turn to vapor and disappear if you don't see them frequently enough. That happens with rubber, and I think that's where I got the idea. Whether it's rubber's propensity inexplicably to rot away, or lose softness, or to fail to maintain air pressure, there's something to the whole theory of entropy and stemming it by periodically checking on your possessions. Anyone else ever noticed that? A monitored balloon lasts a lot longer than one abandoned?

Which brings us to the toiletries kit. There it is again, just the way I remember it. Although the molecular qualities of the contents might be different by now. I wouldn't be too sure about the Aqua Velva and toothpaste at this point, or the deodorant. So we either should've used it years ago (Grandpa) or gotten rid of it in the meantime, donating it to a toiletries pantry somewhere for the poor. By now, since this is nearly 50 years later, it's obviously too late. 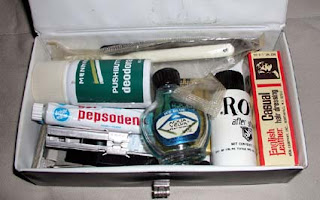 In case anyone's interested, I did a major thing, a big thing for me ... I threw away Grandpa's toiletries kit from the '60s. I really didn't want to do it. I was thinking I might make a few bucks off it on eBay or craigslist, but you never can tell what irresponsible person out there you might sell it to. Then they try to use it, and something in the bottles makes their skin fall off and they end up suing you. So I thought it'd be better just to throw it away, get temptation out of my way, and go on with my life.

Sorry, Grandpa, up in the Heaven, your toiletries kit ... is also dead.
Posted by dbkundalini at 11:16 AM