The Department Of Repeating Dates 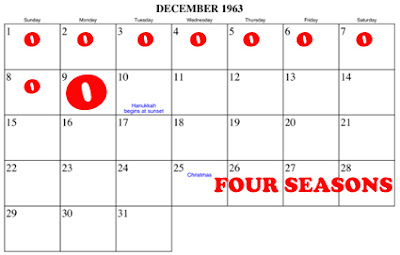 I think it'd be a good government office where we had officials busy repeating the dates of time. It's mildly painful, and equally fascinating, that once they're used, they're gone for good. And that's not a good thing for anyone who likes to recycle.

It'd be a very tidy way of keeping track of the past, rather than just letting it set out there at loose ends. It's nice that each date had today, but then to be cast aside and swept up in the dust bin of history, it's not a fitting end.

And even if we didn't care about tidiness, surely we should care about the psychic value of honoring the past. I know I've had things happen to me on particular dates, and those dates come to have a sacred quality. But you tell someone, even pulling out a calendar to point it out, and they spit on it and walk away. It's enough to make you hulk out. How many calendars ripped in two I've left behind me, you don't want to know!

So let's say we had a big department, and since time passes all the time, it'd have to be growing to keep track of it all. But it wouldn't really have to be that big, because there's only 365 days in a typical year. One guy could easily keep track of 20-30 years, reciting them kind of like we do with the names of war dead or victims of a disaster. He could just sit at his desk (or walk around), listing them off sequentially. And it'd be even better if it was on the radio or internet. My first choice was speakers on public poles, but since people stay home so much, the radio or internet would be better.

I picked December 1963, not because it means that much to me, but just as an example. Although most of us of a certain age have to remember the Four Seasons song, "December 1963 (Oh What A Night)." It meant something to someone. The Four Seasons (the writers, let's say) had a roll in the hay with some chick and it was unforgettable. And yet, "You know I didn't even know her name." That's tragic, to me that's tragic. Leading me to think we need a Department of Sexual Experiences, too. If we could just all be honest enough to list them for the government. The chick would step forward and tell her name, then we'd all know. I just hate the idea of not even knowing her name! Honestly, I'd say, "Baby, nothing's going to happen here till I at least know your name. I'm into people, not body parts..."

Anyway, December 1963. We remember the song says it was "late December back in '63." So I highlighted the last days of the week of Christmas, figuring if it were Christmas or New Year's Eve, the song would say so. Then I highlighted the first nine days, because any recitation of the days of December would start at the top. Why December 9th is given a larger highlight, I'm not going to say; suffice it to say, it doesn't mean a thing to me personally.

Among the benefits, it shows that we take seriously the times of our lives. It doesn't allow the past to be forgotten, but we're continually naming it and keeping it alive. Also, and this is just my opinion, in some way it seems like it'd help atone for things and placate our karma. At least it hasn't been proven that it wouldn't!
Posted by dbkundalini at 1:00 PM