Before Bugs Had Cement To Crawl On 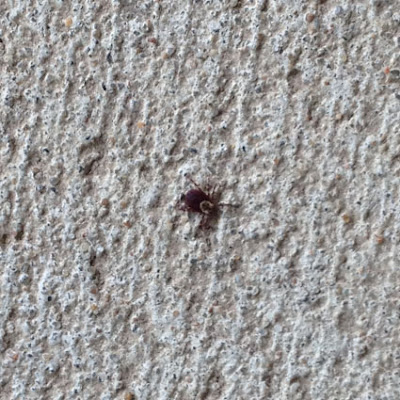 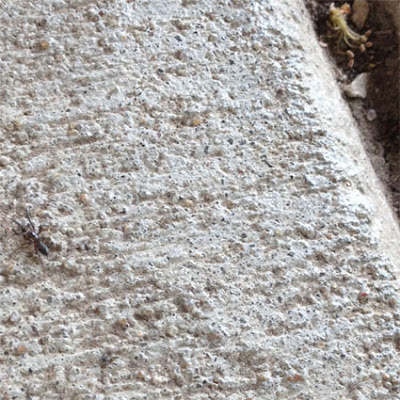 I had the interesting opportunity today to observe bugs crawling on cement. It's an educational experience, to say the least. One I will gladly avail myself of again in the future if I ever have the chance...

The photos were taken by me, and obviously show two bugs. The top one looks a tick and the bottom one is something more like a spider. Each of them was doing OK on speed, making me think that the convenience of cement isn't just a convenience for us, but all manner of creatures. Isn't that interesting? That we, of all the species, pour cement, but the other species are right there to use it!

It's something to think about. It made me wonder about the first bug ever to discover cement. This would have to go way back. Up till then, all they had was rock, dirt, grass, weeds, etc., and that could pose something of an obstacle course for speedy travel. From their point of view, a rock would be like a mountain. Grass and weeds like a jungle. But then someone comes in and paves the path, and they're getting around pretty fast.

So that goes back to the first bug to discover it. Then generations pass, which in their time might only be a year or so. And suddenly we have bugs who've never known a world without cement. Naturally, they take it for granted, never even imagining what their parents and grandparents did, taking a week to get from their hole to the creek, whereas now the journey takes only 20 minutes. No longer do they have to tote water back to cut down on trips. It's all right there at hand. If you're thirsty and you've got 20 minutes, hey, get on the cement and buzz over, of course assuming you can't fly.

If you can fly, cement would still come in pretty handy. It gives you a much nicer place to land. However, and this is important, from the point of view of bugs, the cement can look fairly rough. To us, being substantially bigger, we don't notice much variation in the surface. But for them there's all those crags, not even mentioning the huge cracks between sections. See the edge of picture 2? That's a section line, looking pretty big if you're less than a quarter inch long!

Even the cracks, though, as big as they are, can come in very handy for bugs. Because when seeds and grain blow anywhere, if they're going to get stuck, it's going to be in the cracks. Making the cracks of a pathway a great place to find free food. And it's more or less lined up, ready and waiting for you! So they eat more on the way to the creek, making them thirsty enough to justify every trip.

It'd be great, knowing what we know now, if we could somehow construct (or otherwise procure) a time machine, and set its coordinates for some time in the past before we had cement, and travel back to observe what bugs had to do. It's likely we'd be sitting at the creek waiting quite a while before any showed up. Because the trip there would be a killer, unless they had thought of the obvious solution of living closer to it.

I can picture us back in time, crouched in the weeds, lost in our observations, then we suddenly look up, startled to be looking into the faces of curious Native Americans. We make fearful and hasty, confused sign language to the effect that we come in peace -- pointing to our camera and notepad. They don't believe us and carry us back to the camp, a trip that we note would have gone so much faster if only they had cement paths.
Posted by dbkundalini at 6:40 PM