The Rest Is Inconsequential History 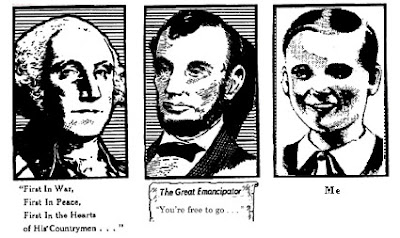 ABSTRACT: I survey the history of the American presidency and a bunch of things I happen to do. The rest is inconsequential history.

George Washington and Abraham Lincoln, two of our greatest presidents, ones I have no problem remembering, indisputably made history. If they fell out of bed, it was a big deal. Especially because they spent so little time sleeping, having wars and the affairs of state to keep them awake. Their influence remains today, as they are the ones I think of first when I think of historical figures. They dwell in my consciousness, up there in my natural cloud (no Amazon or Apple needed!).

What could I say to summarize the influence of these great men? Really, time and full intelligence would fail me, were I to try. So let me just start by saying, "Two thumbs up!" on their presidencies, and, in fact, on their lives period.

Of course President Washington was our first president, which had to be a great honor. He must have been struttin' and trash talkin' all the time: "They can't compare me to nobody!" and "Suck on this, you muthas!" President Lincoln came later in the distinguished line of American chief executives, according to the encyclopedia being the 16th man to hold the highest office. No, it's not as good as Number One, naturally, but you could say "Sweet 16" ain't bad! Not bad indeed, and in some states, still legal.

So let's hear it for Washington and Lincoln! Two great guys, even though it's not February. A grateful nation doesn't forget. What they did, they did. Whether it was in battle. Washington took out the English. Lincoln took out half of America. Or in their personal lives. Washington cut down cherry trees. Lincoln split rails. Their portraits remain with us, which is how we picture them yet today: Washington standing up in a boat, Lincoln staring down the cameraman. I love it that we have actual photos of Lincoln. But back in Washington's time, no one was yet smart enough to invent the camera. Which to us today seems real duh. My brother can make a camera out of a box and a pin! True story!

OK, I'm mentioning these great men today -- Number 1 and Sweet 16 -- to put myself in their company, the company of those who make history. The biggest difference between them and me is they chose to make history hundreds of years ago, and I choose to make it now. Which I'll leave to you to judge: Their history is so long ago we're dealing in hearsay and cliches. My history is up to date, something any objective observer can currently evaluate. Personally, I think my choice is best; certainly it lends itself to greater transparency; I'm not hiding out somewhere in the obscure past, I take my stand today!

About my own history, given enough time and bandwidth, I could go on and on. Like my list of teachers. I could give you a list of most of my teachers. A list you're not likely to come up on your own, because how would you know? It's not in the encyclopedias! Or the way my preferences in life developed. It's funny, the way things go. We used to eat a bunch of wild game that Grandpa hunted. Squirrels, rabbits, coon, pheasants, turtle, possums, etc. And we didn't think anything about it. Then, sometime, suddenly, when I grew up, I decided I'd only eat store-bought food. I'm not even that much of a proponent of hunting these days. But against those who do hunt, I hold no grievance. Old fashioned people hunt, the rest of us buy. See all the history right there?

I'm making history everyday. Here's one big reason: I carry a camera, a built-in feature of my phone. Can you believe it? A camera right in my phone! I can order a pizza one minute and take a picture of it the next! Try that with an Instamatic! Here's the history: My pictures capture a moment in time, i.e., history. I like to take pictures of old windmills and the broad sides of barns. Someday when we get our wind from other sources and all the barns have been burnt down for firewood, my pictures will preserve a bygone era. Like Ansel Adams, they'll be on calendars and coffee cups.

I'm making history right now, just by passing on my memories and knowledge to the world. I can see this blog as a primary resource for researchers someday. They'll be like, "Whoa! This is some good shit!" The researchers will be in little cubicles reading it, one of them starting at the most recent stuff and the other starting at the oldest. Eventually, they'll meet in the middle, like the great Americans who drove the Golden Spike. And they'll shake hands and thank their lucky stars for me. Then they'll go out for drinks and laughs before getting up the next day and doing it all again.

History ... it's a gas. I'm signing off for today ... although history may reveal that I came back.
Posted by dbkundalini at 10:06 AM