Watching The Mosquito Bite Me For Hours 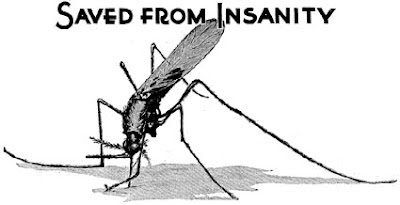 Do you have the discipline to sit unperturbed by anything? A child throwing bricks at you? A nearby train jumps the tracks? A lightning strike so close it burns your shoes off? I suppose you do, although it's possible you don't, like one-in-a-million.

As I write this, the house next door is going down the hill in a mudslide. And yet here I sit, trying to think of the next sentence. There's a tiny bit of curiosity -- I won't deny it -- about what it might mean for my own house's foundation, but I'm not going to let it worry me. There! I've put it ...completely ... out of mind.

Let's think of it in the context of the long term: If it had happened 100 million years ago, I wouldn't have been concerned about it. Even though a lot of crazy stuff did happen 100 million years ago. The dinosaurs were wiped out by either an asteroid or overzealous NRA members, and I didn't bat an eye. Then, too, if it happens 100 million years from now, I don't see myself really caring. So why should I care today? Just because I'm here? I need a better reason.

No, just like you, I choose to focus my thoughts on essential Oneness, and the well being that comes from that. A dance of glad hearts, whether in obvious joy or in so-called suffering. Nothing can disturb us! Not even a mosquito!

I have a twinge of something rattling around my mind as I mention mosquitoes. Because usually I don't care for them. Them or any kind of bug. Especially the kind that crawl or land on us and start biting and/or sucking. Look at the picture. It's creepy. Like an alien spaceship. Then there's the reason for its visit, that little straw going from its mouth to its host. It's piercing the skin, going down into the muscle, into a vein, and drinking its fill of our precious lifeblood. It's hard to ignore!

But if you're going to rise above all distractions, ignore it you must! There it is, in my focus, not disturbing me all that much. I'll just watch as it bites. If it persists beyond what seems a normal length of time, I will glance down and see how long it can go. If it persists indefinitely, I will reward its persistence by allowing it to hang on. It's merely tending to its own needs, just like I'd do if I were in its shoes.

As time drags pleasantly on, the creature gets bigger. Then bigger yet. Then the biggest of all, completely plum full, like a tick but not quite that round. I don't see how it can suck any more! And finally, as if reading my thoughts, with my thinking a little unsteady from the loss of blood, it withdraws, wipes off its straw, and flies away.

How about this? After it leaves, I put a toothpick in the hole to keep its place for later. A little less wear and tear on its stinger that way. Very admirable of me.

It's so great not being disturbed by things. This is truly the path to complete bliss.
Posted by dbkundalini at 11:10 AM