Brothers At Loggerheads With Each Other 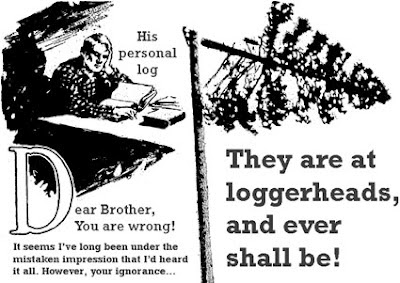 And yet, at much as we hate it, it still happens. The old, old story comes to life once again: Brothers find themselves at loggerheads with each other. With everything then, the bad fruit, that springs forth from that.

Of course it's one thing when we're just kids, and there we are, at loggerheads with each other. One brother might be three years older than the other, and it's just some petty squabble that's put them at loggerheads, something they can easily get squared away, we hope, before bedtime. The parents see the situation and step in to counsel them toward resolution.

But then they grow up. And the age difference doesn't count for quite as much. Maybe Junior has achieved more than Senior. But Senior still thinks he should have the priority. Then before you know it, once again they're at loggerheads, and no one can do anything about it. It's those situations where you basically throw up your hands, or perhaps you pray.

I have had the misfortune several times of seeing situations like this play out. They're at loggerheads with one another over a whole range of issues. "Dad never gave me a chance," "Mom favored you," "You're a political idiot," "Your political choices suck," "You're driving an old junker, shaming the family," and "I'll thank you to keep your tongue in your mouth and your eyes off my wife" are just some of the possibilities. Any one of these can be a tinderbox, and once they're at loggerheads over it, Katy, bar the door!

Now, other issues crop up. They may live at some distance from each other, and there's no day to day compelling reason to reconcile. They found themselves at loggerheads with each other when they were close, and now the sudden separation keeps them apart not just physically but mentally. The wound is allowed to fester. Then someone in the family dies, and you've got a mess at the funeral. It's not a fistfight, just a very sullen, sad reunion; clearly they're still at loggerheads. The grievance remains.

I heard a story once about brothers who were at loggerheads with each other, and I never forgot it. It went something like this: The family business was a shop that skinned animals and processed the furs for the fur trade. Dad ran it, then he died without a will. One brother essentially bulled himself into possession of the shop. So the brothers were at loggerheads over it, and it was quite a tirade on the part of both parties. As I recall, the brother who took possession of it maintained possession. The other was out, unceremoniously.

You can well imagine, when you're at loggerheads with your brother over an issue as great as that, that reconciliation is out of the question. A son of one of the brothers -- the ousted one -- told me the sad conclusion: When his father, the ousted brother, died, his brother didn't come to his funeral. And when the surviving brother died, the ousted brother didn't go to his funeral either. They died just as they had lived, still completely and totally at loggerheads with each another.
Posted by dbkundalini at 7:31 PM