The Gods Of Interchanges And Junctions 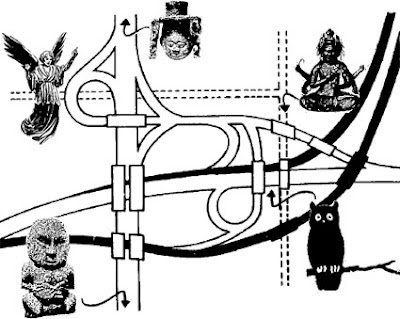 To me, there's plenty of incentives for being a safe driver. The biggest is survival, living to drive another day. Others down the list are, avoiding the intrinsic inconvenience of wrecking, paying big fines, and having to revise your day's schedule at the last minute.

Now, since all gods are human projections that somehow became living spirits, where else would you expect to find them in the modern world? It started -- I'm estimating -- probably in the 1920s when everyone started driving more than before. These powerful projections felt a terrible recurring blockage, having to stop at every interchange and junction. Then some of them got out of the car, and pretty soon they took up residence there. Then, as would be their natural wont, they assumed lordship.

It blew my mind when I first realized this. Because, remember, a month ago I had the brief post on "The Traffic Light Lord"? The city and county has been installing a bunch of cameras at stoplights. Then, mysteriously, city and county employees were sensing a great force, causing many of them to literally explode, or worse, turn to stone. In either event, they're dead. No one knows (or knew why), but this has to be it, what I then discerned, the terrible wrath of the gods of interchanges and junctions!

As the discernment process unfolded, I've been bringing together certain facts, that it's our behavior on the road that's being rewarded or punished by them. With good driving being rewarded, and the driving of the other 90% being punished. How worthy are you? is the main point. This is what we're dealing with!

So, it turns out, the better you drive, the better your trip will be. They're doing all this very actively, even reading our thoughts, watching our progress, and matching it up with others on the road. Sometimes our road karma is tied in with other people's. The worst jams, clogs, bottlenecks, and wrecks are reserved for the worst sinners. So when a guy gets drunk and goes off the steep embankment and his car bursts into flames and he dies a horrendous death, don't feel so bad; he deserved it. But don't feel good about it either, or you could be next. They're always watching. Even when you're at home and not even near a road, they're saving it up to get you later, or to let you pass unscathed.

Traffic police are their pawns. You know how you've been passed by a thousand drivers going 90 mph? And you yourself are only going 61 in a 60 mph zone but get stopped? It's because the gods of interchanges and junctions are doing you a favor, in their own way. They want you to slow down so you don't accumulate bad road karma. As to the others, they have a bitter end in sight, usually a massive pileup, a fiery crash, a bridge-out situation where vandals stole the warning sign, etc. I heard of one guy, his body was blown to bits. There wasn't anything left. His funeral was closed-casket because there wasn't anything in it.

After I figured all this out, about the gods, for a while I was afraid to drive. Then I ran out of toilet paper, and once the leaves of my trees were gone, I had no choice, I had to go to the store. While there, I also got food, which I also needed. And I didn't have a bit of trouble. Every stoplight was green, and there was no competition at the stop lights. I kept in my own lane, kept it below the speed limit, and thought happy thoughts, and I was able to pass through without incident. That night in a dream I saw their smiling faces, meaning they think I'm a good driver!

But what do I see just yesterday? Two semis collided south of town. One was carrying old battery acid for recycling and the other live skunks for delivery to zoos around the country. What a mess! The skunks were mad anyway, but once the acid reached them, they became irate. They let out a stink, and of course a skunk in acid is an environmental nightmare, the farthest thing imaginable from what is pleasant. The whole thing was due to the gods of interchanges and junctions! I guess one of the drivers had a terrible driving record, and the other was going just a titch over the speed limit. What else could they (the gods) do but make them collide? It's kind of funny when you think of it...

Drive safely! But know this, even if you're a completely safe driver, you're not really safe. Because they need a perfect sacrifice now and then.
Posted by dbkundalini at 5:28 PM