Something Put Him In An Early Grave 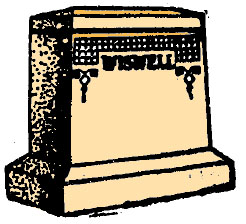 This is about a friend of mine, the late Q------ Wiswell, who was never married yet somehow found himself put in an early grave. He was 42, a young age to die at.

I've given it a lot of thought, and I'm wondering what it might have been that was responsible for his premature demise. It's a sad thing when people die, especially people with any degree of closeness to me.

I met Quentin in church. Of course church is where a lot of healthy people go. They're known for keeping their lives square not only with the Lord but with man. So they're not given to various excesses that so often spell tragedy for those outside the fold. And yet he died ... and I never heard an actual reason why ... Just a bunch of whispers.

What might it have been? Why would "Q" have died so early? Maybe he was living a secret life. That happens, you know. Folks aren't always what they seem to be; sometimes they're quite a bit different.

Could it have been a secret life of gambling and debt? There's lots of people who play the ponies or bet on sports or are addicted to card games and one-armed bandits who die early. Because they're not frugal with their money. They get in deep with the wrong crowd. And before you know it, their money's gone, and so are they! But I never knew "Q" to gamble, and he always seemed to have enough money. He gave me a nickel for a parking meter one time.

Could it have been a secret life of drugs and alcohol? I despise it when people get hooked on all this crap. They think they're having a good time, which probably they are, until it's too late. You start taking that shit and you'll always be chasing the first high. Unless you only drink wine for your heart. But I never once smelled anything on "Q" or noticed any odd staggering.

Could it have been a secret life of treachery and espionage against his country? It's doubtful. You hear of double agents and spies who turn on their country for money or ideological reasons. But I was at his place several times and never saw any weird insignias, flags, microfilm, carved pumpkins, etc. Plus, I was at his funeral and saw his body. He wasn't beheaded, so he was clean in this area.

Could it have been a secret life of womanizing? It might have been! I probably shouldn't tell tales, but I did actually see him once going into a club well known as a hangout for women taking their clothes off, called strippers. The imagination runs wild. I can well imagine these cute girls taking off their clothes a bit at a time, say a piece and a half for every song on the jukebox. Or, to be more exotic, a classier lady with props -- boas, scarves, a shag rug, or a playful dog puppet, sniffing around -- taking it all off in a classier way. The first girl, she's just stripping for a quick carnal excitement. The exotic lady actually puts the tease in striptease! That's what leaves you wanting more, not someone just moving mechanically (and sometimes lethargically) toward stark nudity.

It is very well likely that "Q" died from watching too many bad strippers. That would put me in an early grave, too.
Posted by dbkundalini at 1:22 PM