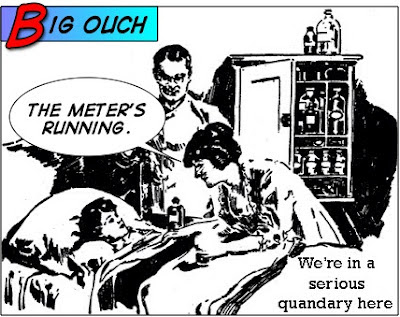 Have you ever gotten a huge hospital bill? If you've ever been in for anything worse than visiting a sick friend, the answer has to be YES. Although, what about the weird irony that eating at a hospital cafeteria is usually cheaper than going anywhere else? It's 80 bucks for a tray of food when you're a patient, but 8 bucks when you're not!

But let's say you're in the hospital for a week. That's when you see the big charges pile up. (I'm not writing out of personal bitterness, but I have a friend who got some big time charges. Like $7,000 or $8,000 a day. Enough to take the vacation of a lifetime and happily drop dead at the end of it!)

Let's just guess at the charges, since I didn't see his itemized bill. What would the toothbrush have to be? Maybe 40 bucks. Then we have the bedpan rental fee, $50 a pop. He needed another blanket, so that'd easily be $100. Then an air conditioner fee so he'd eventually need the blanket, $500 a day. We already know the tray of food is $80, maybe more if you throw in a $10 fee for the lid, $5 for the napkin, and another $5 for tomorrow's menu.

It's great how they're able to make him well. But when he gets the bill, of course he's sick again!

Here's my thought: Folks who work at the hospital have to know what's going on. They know you can get a decent meal in the real world for less than 100 bucks. And go to McDonald's; you can take all the napkins you want for free. I know a guy who hasn't bought toilet paper for 10 years! Hospital employees have to know what expenses are like inside and outside. I bet they are! They think about it all the time, and the ones I see hang their heads in shame. To them I say, "I know it's not your fault personally. Of course you profit off the corruption, but most people, to survive, have to look the other way at their job." So I'm not condemning them. Even so, if there's a literal hell as the afterlife, I wouldn't want to be a deceased hospital employee for anything!

My thought here is, what if we had a hospital employee who was very insulated? He's been in the hospital forever. He works all three shifts. He never leaves. He's picking scraps off used trays and laughing to himself, "I just ate $400 worth of food for nothing!" He steals a hospital bandage and knows he just committed a felony, since they have to be over $20. He looks both ways to avoid getting caught and sticks a $500 gown down his pants. He knows a guy who sells stuff on eBay. That's my thought.

OK, one day a supervisor notices, "Joe's been here a long time, a loooooonnnnnng time. What the hell?" They check the video and there he is, eating scraps, stealing bandages, and smuggling out gowns. He's fired and banished from the premises. He wonders, "How am I going to eat? I don't have $300 for the day. And if I do eat, where am I going to get a toothbrush for under $40?" And so forth. Then he finds, much to his amazement, that things aren't really that expensive!

Hospitals have it made. But we're on to the bastards! After you read this, please pass the link on to all your friends. Talk them out of getting sick, whatever it takes! If they have to drop dead, so be it! Let's starve the beast, these corrupt money-grubbing hospitals!
Posted by dbkundalini at 4:38 PM