There But For The Grace Of God Go I 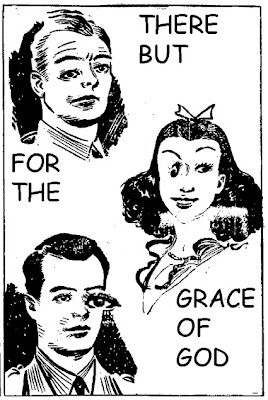 Stylized reflections on my good fortune as compared to others of the human type suffering from dramatic strangeness, all credit and glory being given to God alone:

I saw a guy sitting there with a big bushy white beard, terribly scraggly, basically repulsive. How in the world he could ever find love (of a physical kind) is beyond me. To have that horrific display in your face, not only as a detestable appearance but as a nightmare to the touch, is beyond sickening. And yet, somehow, in his ignorance, he persists in life, appearing in public. Are we on the same page, folks?

This other lady -- fart, this is bad -- was a rolling gelatinous something. About as scraggly as the other guy, no doubt googling a future in the circus. "What are your qualifica--? Oh good God, sign her up!" Mop my brow, I'd never sweat like that in an air-conditioned room. This I saw with my own two eyes; what do you think?

I had to leave. Such a display was damaging my faith in humanity. It's too much to behold. I had to retreat to the bathroom, and without touching anything, behold my own perfect form in the mirror. The nose is right, the forehead not prematurely sloping, the eyes even, looking straight ahead, the mouth a miracle of design, my ears not too protruding nor too small. Oh Lord, who's this coming through the door? What a vile specimen! Reminder to self: Bring toilet safety shield next time!

Back on the mezzanine, I feel I'm again in the safety of normal company. I see one of my rare betters moving by with a briefcase. This guy's a success, such polished shoes, such a nice fitting pair of pants. The eye thrills to follow him as he approaches the light post and vanishes around the corner. When what do I see coming the opposite direction? Saints, save me! How hideous can someone be?! To think this was someone's baby, sucking one time at the breast, treasured and kept from harm! What horrible karma has played out its cruel hand since then? He's a walking zit, with what looks like an unintentional mohawk, and he's a bit old to be carrying a crumbed-out skateboard under his arm!

I'm headed for the bookstore, where the beautiful people live, breathe, and browse. In the safety of those stacks, I can also breathe, breathe in the wisdom of the ages. I settle in the paperback section, browsing and perusing. This or that author, I've heard of them. They were despicable in their time. No one liked them, but I think, if I'd been there, back in their time, I would've treasured them. Edgar Allan Poe is the author of this particular collection. Talk about a guy with a dark side. I should've read Poe more when I was a kid. I got stuck on "Tell-tale Heart" and just read it a million times and everything else none. I look out the window and see a crumb slink by, nothing like Poe.

Where can I go that I shall not be beset upon by life's dregs? Don't these losers, bozos, and turds ever stay home? They're out and about. For their great difficulties at life, they certainly appear to excel in the open air. There's this one guy I'm thinking of, he's like a Viking. He's not dressed in a coat of mail but he would be if someone gave him one. His hair hasn't been washed since he was three. He's got a crazed look, but it might be a put-on. No one disturbs him. You wouldn't dare. He looks dangerous. He's never once exchanged a glance with me. He's so antisocial it's painful...

Another specimen I see ... and another ... there's one without a head, completely severed, and yet he wanders the street. There's another. He can't afford food. But every square inch has been tattooed. Born a rebel. Good grief. Spare me. No head, how can that be? Just a big eye in his navel, exposed to the world. With a very hairy belly.
Posted by dbkundalini at 12:34 PM