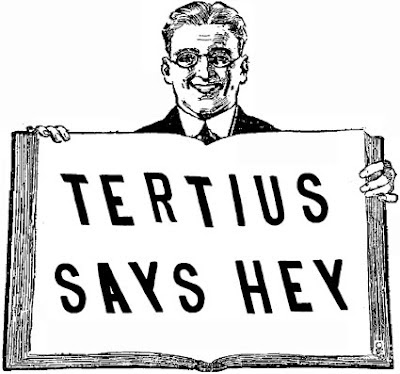 While mowing the yard, I was thinking on the plenary theory of divine inspiration -- God inspiring the Bible so every word is precisely His own -- as it relates to what we might call the very incidental, even trivial, verses of Scripture. Doing yard work, there's no better time to work on these issues, along with trying not to run over too many sticks. My blade needs sharpened as it is.

Anyway, one of the weirdest verses I can think of is Romans 16:22, where, getting to the conclusion of Paul's great epistle, a guy named Tertius, who was the guy manning the quill, tosses in his own hello. I'm not what you would call a big plenary kind of guy, by a long shot. But I've known a few. At first glance, you might think this would call it into question. But maybe not.

It seems obvious it wouldn't have occurred to Tertius that what he was taking down was anything but another letter. How would he know that the thing was divinely inspired, word for word? Most of us don't think that. Yes, maybe I do, occasionally, regarding my blog, but not always.

It's pretty easy to see Tertius was just saying "Hi," saluting the recipients in the Lord. Nothing more. Is that divinely inspired? Maybe so. He wasn't long-winded, and for some people that takes a miracle.

There would be some plenary folks, maybe most, like one of my old friends, who insist that plenary inspiration is only for "the original autographs," which are either lost or no longer exist. But it would seem that this verse would have to be original. He's the guy who wrote it.

So would it take divine inspiration to say "Hi."? Gomer and Goober said "Hey" all the time. Apparently they did it without divine guidance, and they weren't even that smart. What then would Tertius' problem be? Did he need the guidance to put it toward the end and not at the beginning? Did he feel like writing more but was somehow mysterious held back? Short of me taking another mystical journey to the Akashic Records, we're not likely to know.

It seems clear to me that the Bible writers were not consciously writing Scripture, but used occasional letters to make relevant points to their congregations. It was not till the writings were used in the congregations for teaching, then with their collection, and later their canonization, that we have the rise in theories of divine inspiration. Clearly, all Tertius was doing was saying "Hi." It took a century or two for it to become a big deal. And it would only become a big deal because of the surrounding writings. If we had only this one verse in isolation, and were completely unaware of the surrounding writings' existence, we wouldn't come to the immediate conclusion that he was divinely inspired.

I think there's a larger issue, and that's our ability to discern what is divinely inspired and what is not period. Have we somehow an innate ability to make that determination, and against what are we comparing? When I was mowing the yard earlier, I nodded and waved at a lady going by, the equivalent of saying "Hi." I want my own page in the Bible!

But I can really see some ecclesiastical use for Tertius saying "Hi", say for a lesson on being bold and greeting one another. You see the pope or the super vicar of the Protestant faith saying "Hi" to folks, and it's a big deal. Then we say, "I'm just as much a worthy person as those yahoos; I say "Hi" all the time." Tertius was just a schlub like me, and when we say "Hi" sometimes it's a big deal to people.

Six of one, half a dozen of the other. I vote Tertius stays in the canon. He was smart enough to stick it in there, out of his own will, or something higher.
Posted by dbkundalini at 4:05 PM