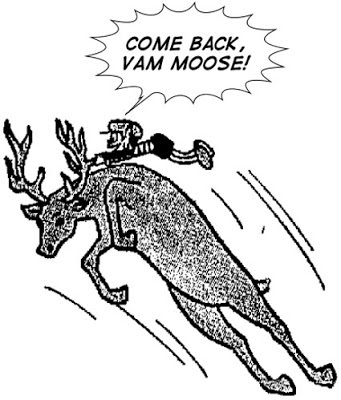 What's in a name? A rose by any other name might run just as fast, especially if it was a literal-minded moose with a weird name like Vam Moose. You get it, right? His name sounds like the word that's synonymous with Scram! Evacuate promptly! and Git!

There's this kid, Seward, who brought Vam Moose home from the frozen wastelands of Alaska when he was a kid up there on vacation. Vam was very small, a baby.

So anyway, he's no longer in Alaska. He's down in the United States, Seward and his new moose, and he gives him this name, as I previously spelled it out, Vam Moose. Seward seriously wasn't expecting any trouble, but Vam Moose, being fairly smart, it seems, took it literally, and scrammed, evacuated promptly, and git every time he heard it.

Seward was out playing with Vam and he forgets and calls out, "Vam Moose!" and Vam immediately runs. And Vam runs fast. He has a very sleek coat, one of the sleekest coats young Seward has ever seen in his short life. The sleekness adds to Vam's speed, there being very little air resistance to ruffle his fur and hence slow him down. So once he gets going, he can't just stop on a dime.

Once Vam kept running so far away, Seward put up posters on every post in the country, saying he answers to the name Vam Moose. You can imagine what happened. Everyone who called out to Vam only caused him to run farther away. That time, Vam was finally spotted leaping over the Florida Everglades, that's how far south he went.

Seward got him home, and it seemed like it'd be a happy ending. But it wasn't, because Seward's mom was calling Vam over nicely to eat some food, Vam heard his name and kicked the crap out of the house, and went through a window. In the melee he managed to kick over his plate of food, which went everywhere, and also cut his leg pretty badly. Enough to have stitches, if they ever manage to get him to the vet.
Posted by dbkundalini at 8:00 PM