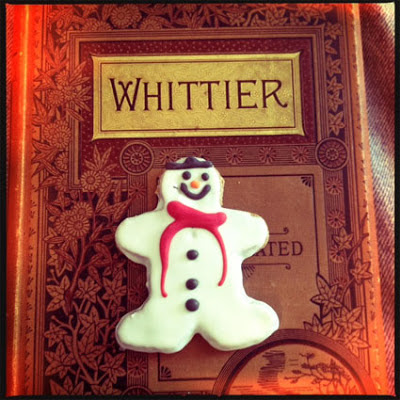 Finally, a Christmas character I can actually like, who brings the true joy of the season to all. No troubles, no conflict, he's simply happy. Whittier the Snowman.

I have to tell you, I'm really sick of conflict in Christmas shows. I was watching Rudolph the Red-Nosed Reindeer the other day, and this is what I'm talking about. Rudolph is bullied by everyone from his father to the younger reindeer to Santa Claus himself! Bullied because of his red nose. I'm sick of it. I can understand the younger reindeer; they're idiots. But his dad? And Santa Claus? How terrible. Santa's supposed to be a good guy, not a bully. So Rudolph, along with his similarly rejected dentist friend, have to leave the compound and run away on their own.

The conflict doesn't stop there, of course. There's the Bumble (the Abominable), the Island of Misfit Toys, and Burl Ives shivering and about to catch his death. There's so much trouble, I'm more depressed after watching it than I was before. You only have to hope Christmas will be foggy every year, just so Santa won't be stupid enough to reject Rudolph again.

One of these shows is on TV right now as I write this, Santa Claus is Comin' to Town. I'm not watching it because I hate it passionately. I think that's the one where the town outlaws Christmas, or outlaws toys, or some such nonsense. Like the Republicans, they're violently opposed to common sense. So everyone's miserable, until something happens -- what I can't remember -- but it has a happy ending. I hate conflict. All I want, all I seriously desire at Christmas, is more or less a slice of life in some little Alpine village where everyone is absolutely happy, giving gifts, with no need to exchange because something's the wrong size. No one tries to outlaw anything everyone likes. It's the ending of Scrooge without the rest.

Frosty the Snowman was on a few days ago. I'm not crazy about this show either. A little because it's obvious they're just giving a stupid story to flesh out the song. But mostly because there's conflict in it. There's an evil magician (or whatever), then there's the kids' sadness with Frosty melting. But they deal with it creatively, in that "Christmas snow" can never remain melted. It comes back on Christmas Day, and as for Frosty, since just living on Christmas Day isn't much of a happy ending, he goes with Santa to live at the North Pole. Where, no doubt, Santa will bully him till he moves to Antarctica.

By the way, in Rudolph Santa also belittles the elves' song about filling Santa's shelves. He complains to Mama that he can't stand hearing that song, and that he wishes they'd all become dentists and run away so they'd finally leave him alone. And Mama's not exactly a benign character, since she's explicitly trying to fatten Santa up. In fact, he goes from thin to pants-poppingly fat in a quick cut from one scene to another. That's one dangerous wife!

Must we suffer everlasting conflict ... at Christmas time? It's even in the original Christmas Story itself, we have to suffer Herod trying to kill Jesus. It's a relief that Jesus grows up very fast and conquers the Roman Empire as His first official act. A hero I can admire.

Which brings us to another hero I can admire -- making two, Jesus and Whittier the Snowman.  But Whittier's story is even better than Jesus', because it has absolutely no conflict. Because your mind should be free and clear at the holidays, not having to put up with pain and anxiety.

Whittier's story goes like this. He's created one day by some happy children. He comes to life, and lives to a ripe old age and never dies. His age just gets riper all the time, but with no apparent aging. The people in his town share in his magnificent powers, living forever, or until Christmas is put away. Everyone is very very happy. Then spring comes and he melts -- happily, with no one mourning. All conflict is vanquished till after the holiday, at which point everyone's life gets back on track. See that? A happy story without conflict -- and I just read it again -- absolutely no contradictions to resolve.
Posted by dbkundalini at 7:58 PM