The Killer With Devil Eyes 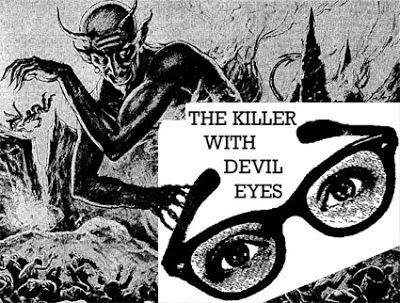 What a terrible night it turned out to be! And I even left home telling myself nothing was going to happen, I would be fine. I thought I would be. I left with the best of intentions.

And then it happened... We were out, at a hamburger restaurant, where basically all they sell is hamburgers and french fries, and I looked out on the darkened night, then up at some of the other diners. Suddenly a guy turns around and makes eye contact with me for just a fraction of a second before he turned back to his meal. I felt a chill go up my already cool spine as the thought bore down on me: "The killer with devil eyes!" Or to flesh it out more completely, "Maybe that guy's the killer with devil eyes!"

Of course I don't know that he was. He didn't kill anyone right then, and as it turned out I wasn't killed later in the parking lot. Although, God knows, the night wasn't over yet. And I kept feeling that terrible chill.

The guy never looked at me again, not unless he was looking at my reflection in the window. Which I'll probably never know. But one think I do know, my thoughts were racing in my mind like lightning. The security I'd just felt was shattered. In one moment my world collapsed. Because how would I know? Even if it wasn't him, maybe the killer with devil eyes was somewhere nearby. Are our thoughts and fears ever false and/or coincidental?

I had a hard time eating my meal, which by now was getting cold, although I put up a fairly good facade of a guy still enjoying his meal. I picked at it. Was the killer behind me, one of the cooks? They seem like jolly good fellows, but what do you expect from a killer in the moments before he has the joy of killing?

Then I had another terrible thought: What about the two boys over there with their parents. They were like five and seven. If they're not currently killers, maybe they will be someday. One of them could very easily grow up to be the killer with devil eyes. After all, the mass murderers of tomorrow are already with us today. A few video games, an angry father, and too many greasy burgers, and a kid's suddenly off the beam.

We made our way to the car, me not stating my suspicions. I thought there's no reason to alarm my partner. Just get to the damned car, check the damned backseat before getting in, and head for home. And then it happened ... wouldn't you know it? The car was low on gas! I had to pull into a gas station. No one seemed to be following me. I pulled up to one of the front pumps, one where it'd be harder to block me in, and got out. I whispered a quick prayer, my eyes scanning the windows of the nearby apartment complex. The minute I saw a rifle barrel I would be down, my prayer being twofold, that he wouldn't blow up the gas pump, and that the receipt printer would work, sparing me an unprotected jaunt inside.

Thankfully, nothing happened. It wasn't my time, my number wasn't up. But the fear still remains. If not tonight, when? And where? Where is he, the killer with devil eyes? Is he a man ... or maybe a woman?
Posted by dbkundalini at 9:41 PM