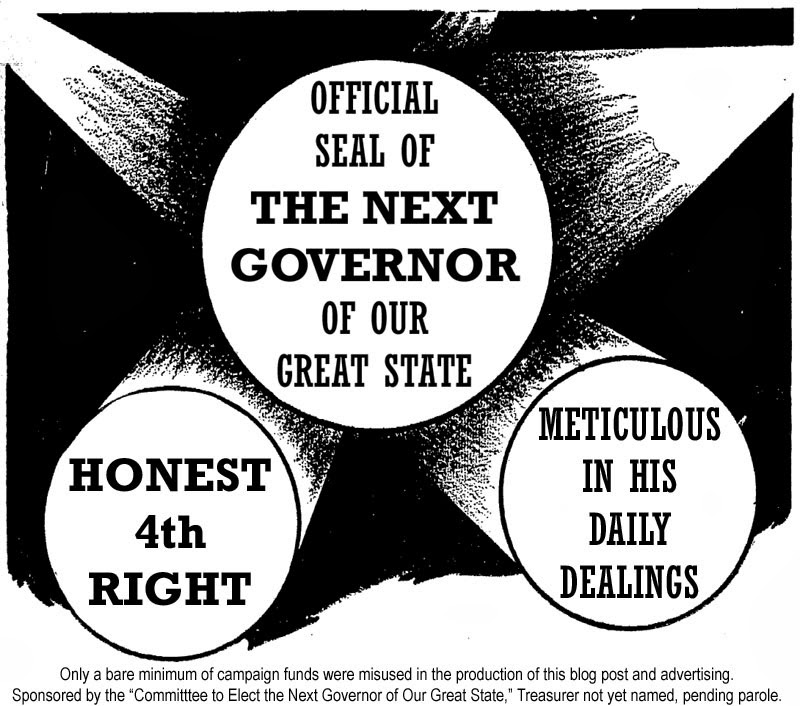 First, let me express my sincerest regrets for my blog post, "Beggars -- Don't Risk the Legal Liability." I agree it was insensitive and hurtful, and I apologize to anyone, especially beggars, who may have been offended. As it turns out, such unfeeling comments, particularly as regards begging veterans on every corner, are politically incorrect as well as detrimental to my future.

Of course you know I'm a candidate for governor of our great state, and you've probably seen in the paper my opponent capitalizing on my gaffe. The blowback was swift and certain, some of it sincere, with probably most of it being just another political knife to the back. The opposition was quick to pounce, as they no doubt would've been no matter what I'd said. I might be finished, although I can still hold out hope that the incumbent will say something worse.

I'm starting to hate politics. All the secrets you have to keep to be a credible candidate. Hey folks, I've lived life; I've been around the block; of course a few little peccadilloes are bound to accumulate. But I believe I can ride out the storm, just as long as all the messages and pictures are deleted as requested, and some of my aliases remain untraceable. Of course I'm kidding, just joking around a little before the election and the day I belly up to the public trough with the best of 'em.

Still, this beggar controversy beggars the imagination. Who knew these guys had their own agitating PAC? All this time I figured their money went into booze and ciggies, drugs and cheap hookers. It's a total surprise that they're actually political animals, pooling their resources and looking for an upper hand in society. They're more connected than you'd guess, probably because of their time on the street; they're nothing but social.

Now -- you know how it goes -- they're going to be on me about every little thing. You know the type; they'll take anything but a heartfelt apology. I could say "God bless you" and they'd crank up the slime machine: "Oh, so now you're blaspheming God! Who is this guy, thinking he has the right to order Almighty God around? Let alone insinuate himself between God and the average voter, seeking, no, demanding, God's favor! What is he implying, that decent Americans can't take care of their own religion?!"

These animals make my blood boil! Little did I know these skunks -- and I'm including my worthy opponent in that number -- would be the only thing standing between me and the governor's mansion. It's sad. It really is, that politics has descended literally to the gutter, where every cigarette butt is a prized possession.

Well, here is my solemn vow, yes, before God -- when elected, I likewise will use the levers of power, to do good for society in general, but to crush my opposition. The incumbent himself, all the way down to the gutter snipes he's using to undermine my character and candidacy. Assholes! I will grind them into the dust, and incarcerate any survivors.

The point is, I'm keeping my good spirits about me -- my optimism -- and I do stand behind my apology. If you've been offended, I'm truly sorry that you're so sensitive. I believe you should actually look at life through something other than rose-colored glasses. If you do, if you can manage that one simple little thing, I'm sure you will gladly cast your vote for me.
Posted by dbkundalini at 6:32 PM