Wise Man Kliptoph of Another Planet 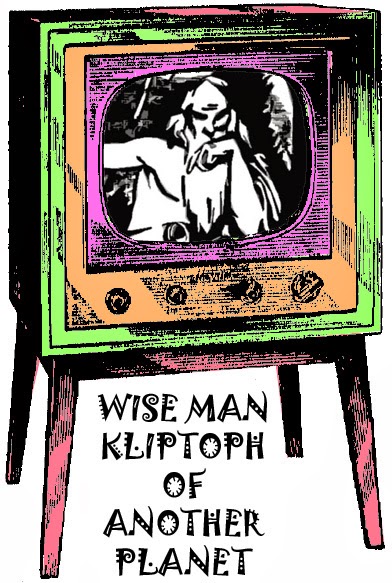 You realize mankind is in big dutch, huge dog doo, right? Disasters, global warming, high gas prices, kids rotten to the core. How long I've thought the basic problem is an abundance of ignorance and a lack of wisdom! "What we need," I've said, "is wisdom from above ... either God or some Wise Man from Another Planet." But after all these years, from my first striving for wisdom at the age of four till now, I never expected anything to come of it.

Till the other night. I was messing with my Roku. You know the channels on Roku? There's the biggies, Netflix, Amazon, Hulu Plus... Then there's thousands of unknown, obscure crazy channels, popping on and disappearing. Mega churches, fly-by-night movie channels, foreign barbarians, etc. I was watching this activity, the flashing and disappearing, when one flashed on and kept flashing. All it said was "Wise Man Kliptoph of Another Planet." I thought, Hmm, then I came under such a compulsion to click it that even Norton Internet Security couldn't have stopped me ... I thought they might have the great film Mutant Girl Scouts from Mars, so I clicked it.

But instead of movies the screen filled up with the image of a Wise Man from Another Planet. Obviously Kliptoph, and the broadcast was live! Not just an old VHS creature-feather bootlegged from YouTube. I watched the swirling black and white image on my color TV and was transfixed. All the apocalyptic problems of the ages registered as one solid image in my Ajna chakra: Man is in a sorry state. Multiple disasters. Death. Ignorance. No wisdom. Sloppy seconds.

At first I thought Kliptoph was just a dream, but he wasn't. I said, "Pinch me if I'm dreaming," and no one did. I asked why he'd appeared to me. He explained I was "The Chosen One," which was exactly what I've always wanted to hear, despite my years of ignorance, failure, and psychological instability. As "The Chosen One," I would deliver Kliptoph's words of wisdom to a world down in the mouth, on the edge, in the ditch, hopelessly mired, at its wits end.

"What planet are you from, O mighty Kliptoph?" He looked at me with great beneficence, then answered, "Hagsmile." I had to laugh, having never seen a hag's smile I liked.

"Heavenly Kliptoph, what wisdom would you seek to impart to a world lost in foolishness and ignorance?" His eyes crossed in a transcendental way and veered upward, obviously into the vast library of his knowledge and understanding. I could see him mentally pulling from the stacks, assembling the materials together, and turning enormous mental pages while seeking up and down, looking for marginal notes. At that point it became an hour of non-stop teaching, most of which, because of my horrendous attention span, went in one ear and out the other.

So I'm sorry, it ain't much, but here's what I remember:


A robofeath in the metulgrip is worth two in the bush ... An ootz of prevention is worth a pitz of cure ... Only you can prevent methane conflags ... You can't put a square plemp in a round plump ... Take all you can gusta, but gusta all you take ... She's too pultrix to be a minute over sovontwin ... Whatever doesn't termtomb me makes me girthulker ... The pombal doesn't fall far from the barkstilt ... You catch more flits with polsticky than with sarfunk ... Change your unhides everyday. You never know when you might have a failadunt and need to go to the medspital ... Always have kumpash. Remember, "There but for the divinsmil of Inscrut go I" ... Ask not what your patrum can do for you --- [transmission garbled] --- your patrum.

I feel wiser already, from just having been in Lord Kliptoph's lustrous presence. It's a lot more than I ever got from mere earthly sources. All praise to the extraterrestrial wisdom of Kliptoph the Exalted. Amen.
Posted by dbkundalini at 12:37 PM