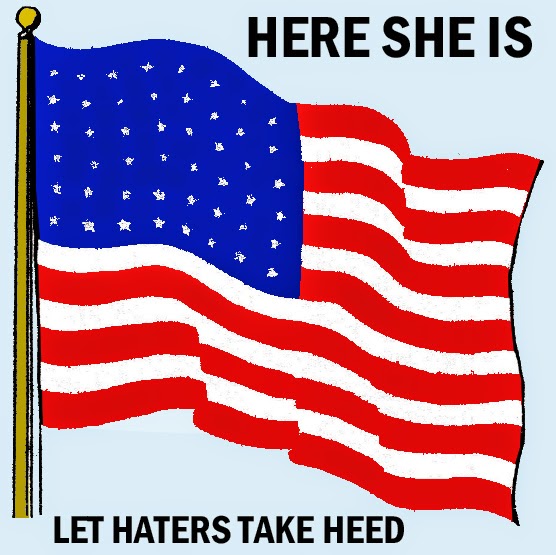 Today is Flag Day. It's time to get the flag out and run her up the flagpole. Notice I said "her," not "it." That's something I insist on, and I correct absolutely everyone I hear say it wrong.

This is my biggest complaint, calling my American flag "it," because it's disrespectful. My flag is "she," or she goes by her proper name, "Old Glory." In saying that, she is called old out of respect, as she who precedes all other things through the ages, while at the same time being ever young. Her age isn't an age as other beings know age. Even Mount Rushmore is old, but not the flag.

I realize we all know this at some level, but not everyone keeps it in mind. And so you constantly hear the ignorant, out of ignorance, saying foolish things when Flag Day's over, like, "I need to put it away." Doesn't that set your teeth on edge? (Of course Flag Day isn't the only day to fly Old Glory, although that's her day of unique pride. Any day on which the elements are such as to provide for her proper respect is a great day to fly the colors.)

Flag etiquette is actually something I've been very good at from childhood. They told me the various rules -- not allowing her to touch the ground, etc. -- and I've remembered. So I'm continually annoyed at the ignorance of my fellow citizens -- oblivious, apparently, to all propriety beyond their own nose and selfish interests. Let's get it together, people...

If I could live somewhere absolutely by myself -- just me and a few flags -- at long last the carelessness of society would be a thing of the past, moot, and my flag could finally get her due. Until that happy day -- which realistically isn't actually going to happen -- I only have recourse to education for those who are capable of learning, and harsh criticism for those who can never get it. Naturally, I prefer education, bringing others into the fold, and seeing the benefits for my flag. But I'm not averse to lay into some idiot if he can't get it right. It'd be better if I had the authority to confiscate his flag, but our actual laws haven't yet caught up with what is best.

How happy I'd be if these matters could be resolved once and for all! Because as it is now the job is almost too much for one man, however dedicated I am. And it takes away in large measure my ability to enjoy Old Glory day to day if I have to continually be interrupted with educating idiots.

I hope this article will jog some memories in your head -- your addled wits are almost too much -- so you too will do what is right. My flag isn't an "it"! Got it? You're going to have to change. Because up next I'm clunking heads.
Posted by dbkundalini at 7:24 AM