Paranoia -- What Maniac Arranged All This? 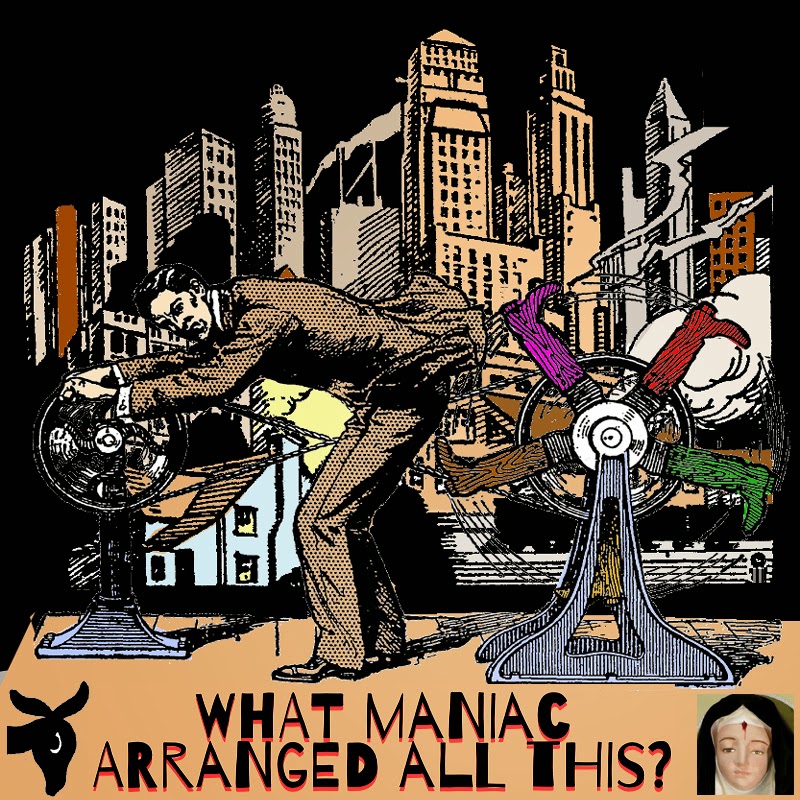 This whole week is totally cheesing me off. Thanks to my old enemy, Paranoia, I can't seem to do anything with a clear conscience, or to put it another way, without forever looking over my shoulder, wondering who's looking back.

This is obviously true in the terrible psychic forays I've made into deep pits, forsaken landscapes, and hellish darkness. But it's also true for normal everyday stuff, like going to the grocery store. I'm sure I saw the powerful denizens of those horrid places at the store, too, keeping me in their sights and thwarting me. As an example, ever notice how the store never runs out of Lender's bagels? Somehow, yesterday, suspiciously, the bagels were out. Then there's bacon, all of a sudden about $6 a pound. My face dropped and I could hear maniacal laughter.

Then, driving there and back, the town took on a different cast. These devils -- the maniacs in charge of tormenting me -- were messing with my head, doing trivial stuff like changing the stop lights to red as soon as I got there. What could I do? I'd be a dead man if I ran the light out of spite. Some old granny, one of these guys in disguise, would "miraculously" appear in the middle of the road and get run over. Then what am I to do? Go to the police department and explain what happened, and be taken away as crazy? No, I had the presence of mind simply to stop. Yes, I shook my fist: "I'll wait you out, you bastards!"

I definitely got the message, though. Which is this: Someone's arranging everything, not leaving a single thing to chance. A puppet-master. (Ha! That's something I know about! I used to work the puppets at church. We did modern rock 'n' roll hits with religious lyrics substituted. Here's what I know about it: You have to practice like a dog to put on a good puppet show. I watch puppets on TV to this day and picture the work they're doing to make it happen. Making the machinations of this puppet-master all the more amazing.) As far as I know, the way I see it, no one's practiced my movements around town. So it's amazing how they know everything I'm going to do.

But why? I know the world has forces, but I always thought they concentrated more on the upper crust and powerful. Like moving the minds of great leaders, swinging the action on the battlefield, and guiding industrialists in how to run their companies. In addition, though, they like to toy with little guys like me, probably for kicks. What kind of kicks would that be? If you have that much power, couldn't you get a lot better kicks doing more high-powered stuff? Like burning down prisons and watching the rest of us run for our lives?

I'm thinking, I'm a very humble man. I've never hurt anyone. Sometimes I even pick up bugs with a paper towel and take them outside. I've done more than my share of good deeds in the past. I just mentioned puppets. We used to take them to nursing homes and entertain the residents. I can still picture the looks of great joy on their faces. We had this one routine where one puppet kept taking the other puppet's lines. He's an eager beaver. But the puppet whose lines he's stealing is looking more and more disgusted. And angry. You show disgust with a puppet by crunching the mouth as much as you can and tilting the head. The residents loved it!

I'm humble, so why bother me? On the other hand, why not me? I've also had some very high-minded thoughts. I haven't always felt humble. I'll confess, sometimes I think, There's no one like me! I'm the smartest, the shrewdest, the baddest (best) dude in town, maybe the world! I'm very proud to be an American, to be who I am, to have my terrific abilities, my looks, my demeanor, my personality, right on down the line. Pride. I'm very proud. And now, apparently, the powers-that-be think I'm in for a time of humbling. The old "humbling" cliche...

The more I think of it, though, the more I think it's undeserved. Realistically, there's lots of people smarter, shrewder, badder (better), and prouder than me. There's plenty of people with better abilities, looks, demeanors, and personalities, and, hence, with a lot more pride. And I don't see them suffering. I think I may be living in a Chinese finger trap; the more I struggle, the worse it gets.

Hey! Where did that thought come from? That's genius! I'm a genius! Or some genius put that thought in my head. Someone who's somehow found a way of thinking and way of living that flies under the radar of the guy pulling the strings. Which -- Wow! what a moment of clarity! -- would be someone who's tapped into what's truly important in life, someone who's faced suffering and dealt with it victoriously. Someone very very humble. I always seem to forget until it's almost too late, then I remember the truth, by some awesome grace.

The ones I'm thinking of now are two: For humility of spirit and outlook, there's the lowly creature who bears the Redeemer, Desi the Donkey. OK? I love him. Then there's one with all that and more, a dear one with a running sore on her forehead given to her from on high by her own request, one who for a time was despised by the world and belittled even by those who should've been her closest friends, one ridden hard and put away wet, spiritually speaking. She's one of my favorite saints in the whole wide world, St. Rita of Cascia. Good news!

There may be some stinking maniac in charge over all -- over this world -- seeking out people like me to trample into the dirt. But he's going down! Because there's also a good side, represented by many other good beings and saints, those like Desi and Rita. I shall be victorious! I shall prevail! There's no one badder (better) than me!
Posted by dbkundalini at 10:27 AM