How'd I Get So Damned Smart? 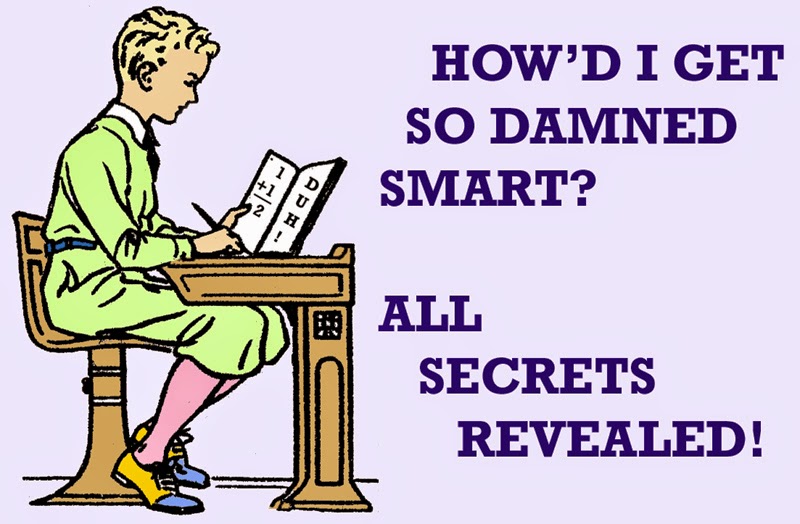 I get this question all the time, from people I know in the community, in church, as well as online. Everyone wants to know, "How'd you get so damned smart?" I can safely say it's the number one thing people wonder about. Although with their curiosity they challenge my modesty.

It's tricky to answer a question like that. Because I really do have to set aside my modesty and admit it right up front, Yes, I am pretty damned smart. And I'm smart enough not to do that readily. Hence, I've been sitting on the question for a number of months, reluctant to answer it, knowing it'd ding my modesty and sense of propriety.

But today I'm feeling bold! Who needs tomorrow! I'm ready to tackle it head-on, finally to satisfy everyone's curiosity about the intelligence of someone I frankly call "Little Ole Me." Really, that's how I think of myself. I'm not all that impressed, to tell you the truth. Because I know even I have plenty of limits. But my limits are for another day. Today we'll stick with how much I know.

My way of swinging in school was pretty much to grasp the basics and extrapolate from there. One thing I'm not very smart at is mathematics. Anything you might need on a GRE or the SAT, I immediately fail. But I am smart at arithmetic! I can add and subtract myself around the room, passing everyone. The way I learned it was, like I said, extrapolation. They said 1 + 1 = 2 and I extrapolated from there. Everything else was easy to deduce from that one principle. So I refused to learn any of it by heart, just extrapolating, however long it took, on the fly. That left lots of time for learning other stuff.

Because it's facts other than math that you can't easily extrapolate. If you know the capital of New York is Albany, it's tough to extrapolate from that that the capital of California is Sacramento. Those are two facts I had to learn, which I only accomplished after a lot of effort. Even now I could probably tell you at least half the capitals of the various states, even ones I have no intention of visiting.

When it came to reading, I literally grew up with one story book. Only one. Which I read a million times, and loved, "Little Black Sambo." You put enough effort into one book, you learn a lot besides just the great story. I learned to love and respect others who aren't like me, Indians, black people, LGBTQ, Lutherans, etc. The only ones I still have a hard time with are Republicans. Of any variety.

In addition, I grew in my love of animals, butter, pancakes, and embraced asynchronous thinking, because who can believe that tigers, running fast enough to turn into butter, wouldn't think to cut across and head off Sambo? Unless Sambo were simultaneously smart enough to cut across at lightning speed and therefore maintain his safe position. Stunning stuff! You could seriously say, when it came to book larnin', everything I know I got from "LBS."

Now I'm old. And it's surprising all the stuff I know. I don't think I'm too far off the beam to say I don't even know all the stuff I know! Know what I mean? It seems everyday there's always something different leaping out of my brain, a sudden occurrence of something else I've known all along. Examples aren't coming to me right this second, but I know it happens. When do you clean an aquarium? When it stinks or the fish die, whichever comes first.

So to answer the question, "How'd I get so damned smart?" ... It all depends. Math, I extrapolated from 1 + 1 = 2. I can balance my checkbook and occasionally have money left over. Things that needed memorizing, I memorized, then over the years forgot exactly half of it. How to spell. I learned a trick from my Mom, to know how words are supposed to look, then when they're misspelled they look wrong. The various principles of life -- the value of being scrupulously honest, for example, and the consequences when you aren't -- I learned by experience, along with trial and error. Other things, the deeper things of life, spirituality and such, I learned by practice, leaping in gadfly fashion from one thing to another. Meaning, I'm a solitary specimen in that regard.

The other key to being so damned smart is to always keep my mind sharp. As sharp as a knife, as sharp as cheddar cheese. Honed, stropped like a razor, keen. So I'm busy thinking from the minute I wake up till the minute I go to bed. Then I continue thinking till I fall asleep. And, if my dreams are any indicator, I don't stop thinking till I get up, at which point I repeat the whole process, thinking again. I'm also a voracious reader, reading while I eat.

Thank you! It's gratifying that everyone thinks I'm so damned smart. Just don't get jealous, OK? You either can do it too, or you could have, had you not lived your life in a completely foolish way.
Posted by dbkundalini at 1:18 PM