Paranoia -- This Dark is Huge 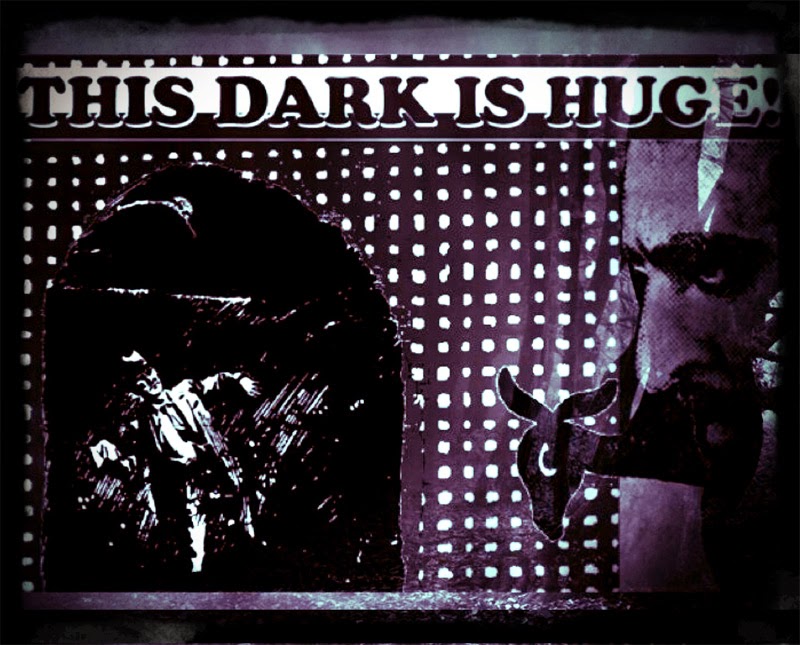 Hello, everyone, just a quick message from the heart of darkness, thanks to the 'Journey to the Center of Paranoia' I'm on. I have to tell you, even though I sound normal enough right now, in part thanks to being able to communicate with you, things have been crazy. I've been running, running very fast; it's all downhill here. The trip back will be much tougher, but, looking on the bright side, my bad knees could use the exercise. I just hope I can make it.

Getting out is frankly one of my biggest worries, since there's very few signposts in this land of shadows; it's so dark in fact you wish for shadows; that'd be a step up. Another worry is the sense that I'm not alone. But how they manage it down here, and find it completely habitable, that's another mystery. It's like they say on science shows, no matter the extremity, life finds a way. Like some of my earliest relatives growing up in Missouri. Tough times back then, stopping every 15 miles to patch the tire.

The beings I've seen here, you have to understand, I haven't actually seen. I've caught glimpses of movement, indistinct, nothing to focus on. Which is scary, depending on how close they get, what their breathing's like, etc. It's hard to judge, although I've always been of the opinion that furtive movements in the dark are ominous, bad. Were I to live here forever, I'm sure I'd fit right in, becoming acclimated to their ways. God forbid, though! I can imagine a terrible devolution, losing my eyes all together!

You can only imagine... I'm only imagining so far. I've never descended this far before, but the more I think of it, the queasier I get. I'm bringing to mind things I've read about the unconscious, the contents of the collective unconsciousness. Ever heard of that? It's nothing to mess with, but I'll confess I have messed with it ... many times. You think it won't hurt, but unless you go through certain compensatory motions, actions, and thoughts, you can be quickly bogged down in weird delusions. That's true teaching, by the way. There's a psychic price for everything, and unless you want to go crazy you need to pay it off quickly and directly.

Crap, that's what's happening to me right now! I can't perform even the thinking compensatory stuff while I'm here; that's irrational. Not while I'm in it! What this actually means -- terrible realizations are coming to me in real time now -- is I'm likely to be consumed at any moment. It happens just that fast. That's the true reason why the denizens here don't have to leap out. They have you simply by your presence! When I'm in my terrestrial room, at least I have the light consciousness environment, but here I'm surrounded, I'm in the belly of the beast. And that's not figurative.

The air is stifling and breathes thin. But my eyes are getting used to the darkness, which 10 minutes ago I would've thought was good news. Now I realize -- all these terrible truths are hitting me -- that darkness must remain darkness. Once darkness transmogrifies for you into light, that's the totality of your sight. I don't know what's left for me to do. There's no escape, none I can see, for all I see is the hugeness of the darkness. How about that? Where the path out is, to me now that's darkness. I'm ensnared! This is like being 10,000 miles from home, with nothing, not a friend and not a cent to your name.

I guess I should do something. Like sleep? If I found a place in a dark ditch and just slept -- what would I wake to? Would I wake? If I had one request to whatever forces of good, whatever forces of light might exist in this bastard realm, it'd have to be an abject, plaintive plea, "Get me the hell out of here!" But my cry echoes off the walls and cliffs of destruction, and, instead, I sink further. The horizon's giving way. The foundations all around are crumbling. What I wouldn't give for a good old garden variety paranoia, the simple irritating sense of dismay I've always known, with a twist of manageable forces watching me. The burden here is much too immense ... yet, again, I'm feeling more and more at home in it. Bad news.

Someone's coming from the opposite direction! I must hide, maybe jump out and make a meal of them. Looks like a lowly donkey and a nun, no big deal ... I've never liked donkey meat and I'm not hungry enough for a nun. A donkey and a nun? Could it actually be Desi the Donkey and St. Rita of Cascia?!
Posted by dbkundalini at 10:25 AM