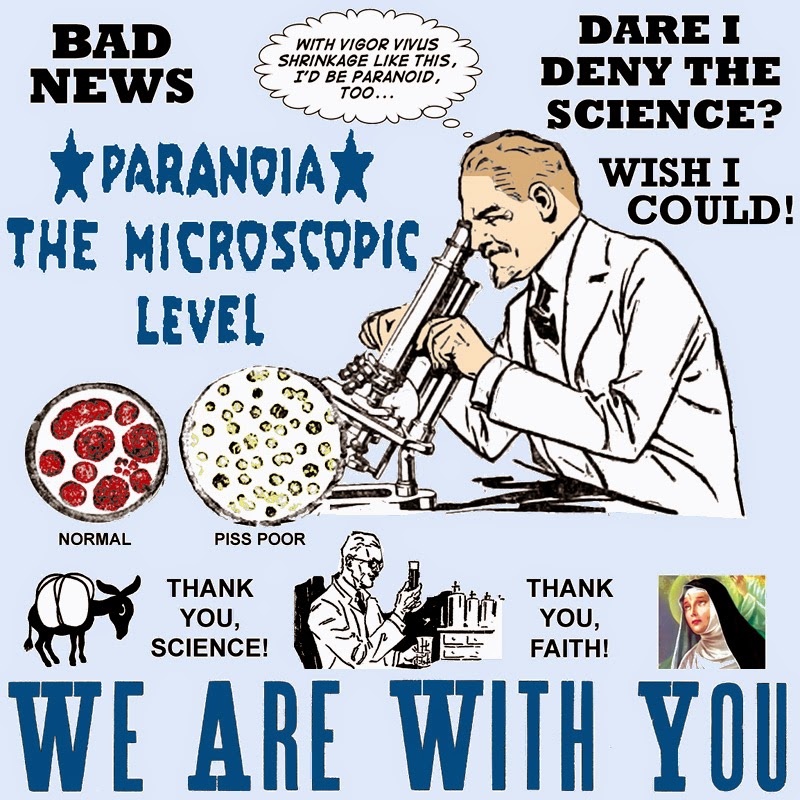 I've been worried maybe there's something wrong with me. This week's been filled with total, huge paranoia, so bad I've often personified it, something like a hulking being, Paranoia!

That's certainly how it's seemed, and it'd take a lot at this point to talk me out of it. I've been in strange places, there's been a lot of bad and some good. I've faced basically every disaster I can think of short of a nuclear war, which at least would've distracted me from my own troubles solely.

It's funny how these experiences go. Sometimes you're the center of the universe, so important, and unable to satisfy the powers that be. That field's fertile for paranoia. Other times you're marginalized, alone, at your wit's end on how to manage and survive. I don't know which I hate more. The first involves much more sinister enemies. The second is like Man vs. Self, although, it's likely both are Man vs. Self ... since, honestly, there's no sinister enemy that cares about me that much.

I think the most logical conclusion is that this is internal to me. Was I really in the Valley of Fire Snakes? Yes, although I can imagine a pretty terrible Valley of Fire Snakes. It depends on what we mean by "really," because in some sense I was really there! Now, if it's internal, like I learned that time in the asylum, maybe there's something more our scientific friends can do about it.

I know a man of science, Dr. Pink, who's always good for a go on any knotty scientific conundrum. I went in thinking I shouldn't have kept this entire week of paranoia from him. I knew he would've been there for me, and probably would've had a supply of killer narcotics to deaden it. Although, just between me and you, I prefer to experience these things. But what? I don't want to be failing internally, if that's what it is!

Right away he was looking at my samples from a couple years ago and my samples this week, and he had an immediate verdict: My levels of Vigor Vivus were piss poor, with normal, large red Vigor Vivus being replaced over time by shrunken yellow piss poor Vigor Vivus. Almost so shrunken and yellow, he said, as to not even be Vigor Vivus, but its opposite, Rigor Mortis! I wanted to deny the science, but how could I? Dr. Pink's the expert.

Right away, I'm like, "You mean to tell me---?" Already he's nodding, a concerned look on his face heightened by the raising of hands pressed together, with the twin index fingers lightly touching the tip of his nose. He furrowed his brow and I knew I was in trouble. "With Vigor Vivus shrinkage like this," he said, "I'd be paranoid, too!" -- commiserating enough to tell me that I would've had a friend in misery had he shared the same deficiency.

He was silent a moment, leading me to tentatively venture a question, "So, this means---?" But before I could finish, he was already answering, "I'm putting you on bed rest and a strenuous exercise routine." I nodded, at that point willing to do anything to raise my levels. How often I've written* of Vigor Vivus! How could I not have thought of this! All this time it's been the grip of Rigor Mortis on me! Of course!

He wrote out a memo for the pharmacy, to give me this, that, and the other thing. Then I was to be out in the fresh air, the bright sunshine, walking, meditating, writing anti-paranoia manifestos, sending anonymous letters to the editor about making Vigor Vivus Day a national holiday, etc., stuff I used to do all the time.

I had let my better angels slip! I shared, then, with the doctor, that I was a little torn between Faith and Science. He nodded, and held up a finger, as though he would speak. Then he was silent, as though he was searching for just the right word. He caressed his lips with the thumb and index finger of his right hand. He reached his pinky into his ear to scratch. He also scratched the side of his head. Obviously itching to say something.

I primed his pump, "So I was wrong---" He interrupted to tell me, "Not so! Don't say such a thing! It's completely natural, with everything you hear in the news and popular culture, to be torn. Because they're nothing but idiots, serving only to pollute the air, so to speak, to muddy the discourse with their unceasing idiocy. The truth is, there is not the slightest split between Faith and Science."

I tilted my head, looking curious. He continued, "I am one of the preeminent men of science of my time, agreed? Of course. Frankly, there's no bigger bad ass than me when it comes to the laboratory and a quick diagnosis. I often forgo the lab, as I simply know the truth.

"How? you ask. Because I have crossed every divide, and now live in perfect harmony with all things, the so-called natural and the so-called divine. I share the omniscience of the yogis and oneness with the Divine, able to materialize palaces and laboratories -- you name it -- in thin air. Mere diagnoses are nothing!

"Now, the truth of this whole matter is, I knew about your paranoia before it happened. But I allowed it because I knew you needed to get yourself back on the right track with life and the things that concern you, as well as with Vigor Vivus and your spiritual life. You were once a fearless advocate against Rigor Mortis, but you've fallen.

"It was I who sent those peerless guides of the soul to be with you and help, Desi the Donkey and Sister St. Rita of Cascia. You knew of Desi's relation to the Redeemer, bearing Him, and the depths of St. Rita's sufferings, and the heights of her grace. Both she and Desi share the oneness of all things -- in every aspect of their being, which is eternal. They kept you from the very real dangers you faced. Ultimately, though, it was I who led you through this most perilous challenge."

I was of course dumbfounded, but Dr. Pink was every bit the serious scientist I've always known him to be. I ventured a word, "And so---" He interrupted to say, "Exactly! It was all for your good. Just like bed rest and a renewed focus on your personal Vigor Vivus will be good for you, just as I, the doctor, ordered!"

We hugged, both of us sobbing. I looked in his eyes and he in mine. In mine, he surely saw doubt and disbelief. In his, I saw the wheels turning; omniscience, while nice, is a relentless taskmaster. Of course I don't believe a word he said about arranging this. That's just megalomania, but I'll leave it there for now; I don't know enough on the subject yet, firsthand, to have a "Megalomania Week." But he was right about Vigor Vivus...

In conclusion, we made plans to get together, very soon, at the Roadhouse for beers and pool. Because he moved heaven and earth to get me in this mess, then moved them again to get me out of it, I'll be buying.