Paranoia -- I Know Where You Go 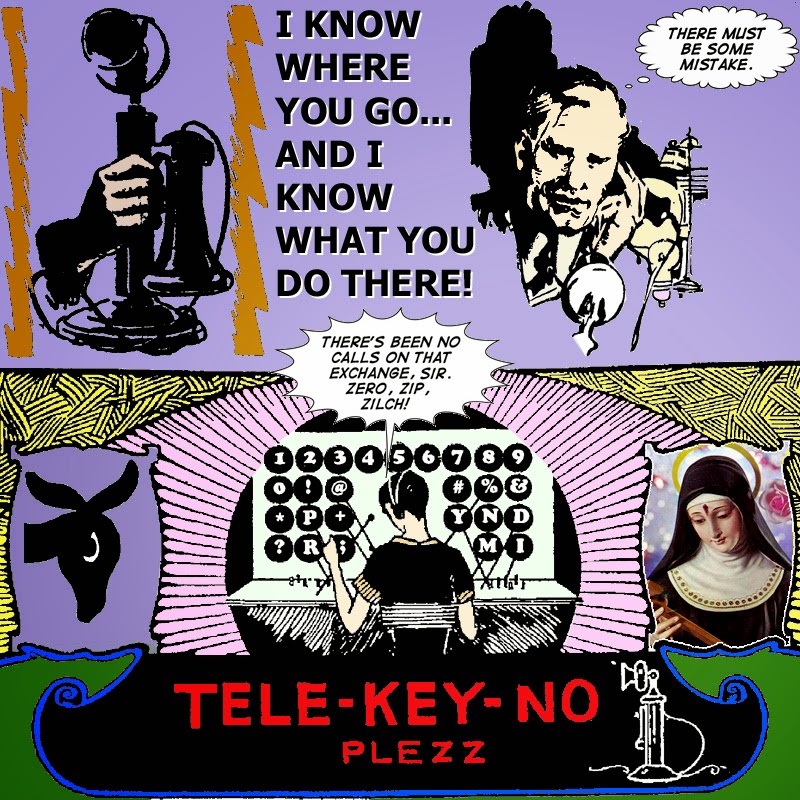 The clock says 3 o'clock, but it's so dark out. I'm not sure what that means. It's been dark for days. I keep checking the windows. They seem to be sealed, nothing oozing in. And everything's OK with the walls. The feeling of being closed in is so comforting. Finally, after a couple days of hell, everything's settling down. My poor nerves could use the rest. But it doesn't last...

I hope you see this post, OK? They've been blocking my internet feed -- someone, it's on and off -- so very few people are aware what's going on. As for those few, I believe they're telling others to ignore me. It's a mess. I suspect the traffic I'm getting is just the lookout man for the others, checking in to monitor me. They want to shut me down, but someone still needs to check on me. I can be happy for that, because where's there's breath, there's life!

It makes sense that it'd be the lookout man who's calling me. Who better than the one watching? I've had his calls before over the years, which doesn't make it any more welcome. It puts me in a bind. Once I start thinking of it, it's hard to think of anything else. Who is he? Does he have an actual life? Leaving his wife for work, "Heading out, dear. Pulling a double shift in some guy's tree." She goes, "Don't complain, it's a job." He thinks of his heritage: "My dad was a tree-sitter, and his dad before him."

I argued, "Where do I go? I don't go anywhere," which is more or less true. Still, I have to wonder what the hell he's talking about. I haven't been there, I don't think. And even if I went I didn't really do anything there. You know? What would I have done?" I hang up and I'm even more defensive, tying myself in knots over his words. How can it be someone's actual job, to torment me?"

I call the operator, who checks the exchange and says there's been no calls, either in or out. That's not such a surprise. Guys this tricky, it's easy for them to bypass the normal routes. I say, "Are you sure? Try to trace it." She says they can't trace calls anymore. That with the switchover to cell phones, all their eggs are in the new basket, leaving the old basket unguarded. OK, with the old basket unguarded, I decide to fight fire with fire. Meaning I'll test the system with a few prank calls of my own. I go for a variation on the old "Prince Albert in a can" call. I dial a grocery store and ask, "Do you have Mrs. Dash in the sack?" "Yes, we do!" "Well, get her up, she's got the runs!" Now watch, the police will be here in five minutes!

Getting back to the guy, "I know where you go..." Maybe they saw me that day I dropped off a casserole at the church for the funeral lunch, and that's what he means. But that was a good deed. No one's going to call me with funky sinister breathing for something so innocent. So I'm left with it being something else, something worse.

How would they know I was there? Unless they were there themselves! The last few places I've been, there were others hanging around. It could've been any one of them. But another way to look at it is, I'm being followed, or observed when I leave the house. I did see other cars on the road, like always. They had to have lieutenants along the way -- confederates radioing the others. One big radio network. "He's passing 4th Street now, that's Four-uh Street-uh, roger?" Even though at that point I could've be going anywhere.

Once I get out by the old bridge on the west side, though, that narrows the possibilities. Once they see me passing the old bridge ("He's now passing the old bridge. That is Old-uh Bridge-uh."), unless I'm headed out of town or the cemetery, unlikely, then they'll have it immediately narrowed down. A sick friend? That's at least a defense, until they ask my friend's name.

Just speaking theoretically, let's say I was there, OK? So what? It's a public place, right? A place of business. Others are there. I'm not wearing a mask. What are they doing, calling every guy who darkens their door? How would that help business? It'd just keep guys away. Or maybe these callers have a different game, blackmail. He didn't make any demands, just got me stewing about it.

What's the crime? What's the evidence? Shall I pay? My mind's a swirl. Have they got me on camera? They'd have to. You can't take a country drive these days without at least satellite surveillance. They can hit a tin can in Afghanistan, of course they've got the homeland micro-mapped.

I look out the window and see some rustling over by the pussy willow trees, some distance from the house. Could be the wind, or some other activity. Maybe the caller's watching to see if I'm looking out..

I wonder to myself, alone with my thoughts, "Don't give them anything to go on. Simply deny it. Don't answer the charges. It's no one's business anyway. Their evidence isn't worth a fig." If that's true, though, how'd they even know? No, they're on to something! The only thing I can hope for is that I'm one of millions. Safety in numbers. That would explain the lag between calls. They're busy with everyone else's phone. What that doesn't explain is the movement in the tree. That's definitely hard to explain, the micro-mapping that puts them in a guy's very own tree while calling.

They haven't asked for money, so I'll sit tight for now. And, like I do in other times of stress, daydream about the old legend of Desi the Donkey, and the beloved sister, St. Rita of Cascia. Her forehead wound flows so much from just one of 72 thorns, just one. A funny little twist: In my thoughts Desi brays, as if to say, "Don't worry, it'll be OK."

Right then, I hear a siren outside. The grocery store traced my call and called the police. And they're shooting flaming arrows over my thatch-roofed house. Trying to burn me out, eh? I settle in. The phone rings. The operator's telling me she'd talked it over with the supervisor and she had it wrong. It's only if you make a prank call with a cell phone to a landline that the call can't be traced. Landline to landline, those are still traceable.

Desi, St. Rita, and I join hands and sing, "Count your many blessings, name them one by one."
Posted by dbkundalini at 12:51 PM