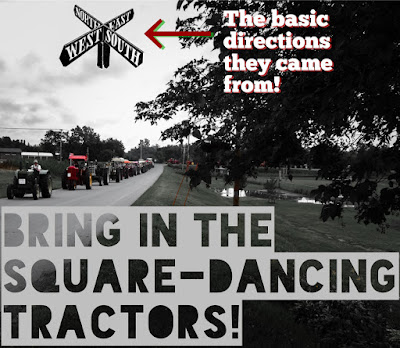 When the history of this battle is written, let the word go forth, to friend and foe alike, that like Frank Sinatra, win or lose, I did it my way!

A number of years ago I was in the company of some folks who were excited to go see the Tractor Promenade, square-dancing tractors. The guys who drove the tractors were all men, but because square-dancing is generally done by men and women, half of these guys were dressed as women. Not in a pretty way, lest anyone think they shouldn't be allowed to use the restroom, but in an exaggerated way. Big thick wigs, floppy dresses, and beards were part of it.

I wasn't excited about it right away. I mean, look at me, I'm a cool cat; I can't be impressed by the ways of country folk and their laughs, can I? Well, you know what? I'm not really as cool as everyone thinks. Most of my YouTube history reveals I watch a lot of "Hee Haw" clips. (For some reason there aren't full episodes of "Hee Haw" out there, that I've seen.) I like Grandpa Jones, Buck Owens, Roy Clark. Once I hitchhiked nearly 250 miles to see Roy Clark perform, then when I got there, I can't remember what happened, but I never saw Roy Clark. I'm full of stories like that, because I'm not cool.

The charms of square-dancing tractors got to me, to the point that I became a Tractor Head and followed them around. And when I'd see the guys, I'd often make eye contact with them as they performed, a tear in my eye and tapping my heart, as if to say, "You're in my heart, I'm misty, keep that dress and wig on, and shave that beard, and we might get it on." I've been very lucky in life, but, alas, it never happened. I had to turn and walk away, solitary, in tears, clutching my program, and hoping to escape the place without someone laughing at my failure.

Regardless of all personal heartbreak, and especially now that I'm older and losing a lot of my ambition to succeed -- because What's the Damned Use? -- like the Virgin Mary, I've treasured the things of the Promenade and kept them in my heart. I became friends with one of the guys, who now is my contact in this present distress. Putting a end to the terror wave of one Myra Kula Electra!

Friends, she's going down! When she catches sight of the Tractor Promenade, it is going to be so confusing to her. Tractors square-dancing! If what I'm thinking is right. That demons have the kind of mentality that expects a certain amount of order in the world. I believe their mentality is very orderly, despite their reputation for chaos, and very literal. Demons think A leads to B, in a direct line. A doesn't lead to C, you see, because demons are hung up on directness. Tractor square-dancing is antithetical to linear thinking; they'd freak out. Remember the multitude of demons Jesus sent into the herd of swine? They didn't say, "Let's bide our time on this hillside till Jesus is gone, then come out and go about our business." They freaked out directly, ran into the sea, and presumably got wet.

But enough about demons. Get me started like that and I'll talk your leg off. I'm not bragging, but I probably know more about demon psychology than most people my age and of average intelligence. Demons are basically stupid, they just have bullish dispositions, but in a few years they might be president. Say we had someone set the example for them, it could happen. I'd gladly vote Demons for President, because I could cast them out anytime I wanted!

Let me add one more important thing. Myra, I know you read this blog. In the name of everything holy, after you read this post, you must promptly forget it. Thank you.
Posted by dbkundalini at 7:59 PM