Mapping Out My Strategy 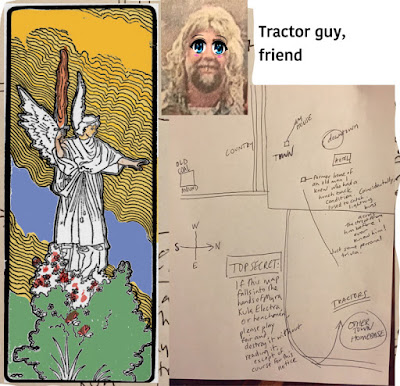 I'm busy, very busy, checking the signs, getting my forces in place, strategizing, taking time out to run the dishwasher twice today, taking the dog out, and getting myself spiritually aligned. I actually have dealt with dark forces before -- but nothing like exorcisms in Mexico, nothing that bad; I wouldn't mind having a wall just to keep actual demons at bay -- so I'm reasonably familiar with evil. It's something a guy has to be careful talking about, lest he rouse them again. I'll just say there's some bum spirits out there who wouldn't mind getting a piece of me. But I'm strong, like a knife you buy at the State Fair, guaranteed for life.

So, yes, I'm checking the signs and so forth, because honestly I don't know how it's all going to shake out. Whether it might be a 'Rumble in the Jungle' or will simply 'Go Down Downtown'. I've been penciling out a map of the area. I've been in contact with some of my friends in the tractor dancing sector; make note of that, you heard it here first. The guy I've been in contact won't mind me putting his publicity pic up. But just in case, like Jackson Browne, I doctored his eyes to maintain his anonymity.

As to what we know about Myra Kula Electra's plans and her forces, it's very little. There are things we don't know. Like me with the facts of life when I was 16! Ha ha, don't want to go there! I'm a little giddy tonight, maybe you can tell. I guess I get that way every time my life's on the line. With the weight of the world coming down I might get crushed. Like when I was 16, many crushes. Ha ha, the facts of life thing is all moot now -- I got it figured out in time not to need it! By the way, I am not lusting after Myra Kula Electra. Give me a break! Yes, she has a very appealing exterior, but mentally -- I don't know -- public sex with prisoners? That killed it for me.

I just hope she's not smarter than me. That'd be terrible, wouldn't it? Let's say she's got a lot of her evil supernatural buddies, sulfur, fire, balls of fire she could be throwing. I've got nothing like that. If it comes to supernatural stuff, I just have to hope that good actually has the advantage over evil. I'm guessing so; I have theological reasons to think so, but even so I have to hope there's something to it, something more than wishful thinking, or logic that hasn't necessarily been tested.

OK, the map. That's the basic lay of the land. The center of town's where most things happen. It's hard to believe she won't go for downtown, but when? First, second, third? But I think there'll be another part of it, i.e., the supernatural portal at the old coal mound. Remember that? It could be I'm all wet all the way round.

One thing I have to warn you about, this isn't fiction. So you shouldn't expect the basic fiction outline of this battle. Which would be: 1) Setting, engagement; 2) Advantage, Myra; 3) Advantage, Me; 4) She retakes advantage; 5) I'm weakening; 6) Something intervenes; 7) I'm able to rally; 8) Etc. Chances are it won't happen like that. And I seriously have no one to come zip-lining into the scene. Frankly, I'm getting confused. I should probably be saying a few Golden Child mantras to psych myself up. Anyone know any?

I've only been The Golden Child a little over a week. What the hell am I battling Myra Kula Electra for, already? Is that what you get for being The Golden Child? I need to think this over. There should be a few months of happiness first, right? Maybe that's it. I kill (or otherwise neutralize) Myra (the reason suddenly escapes me) then I live happily ever after. Surely there's room in the whole wide world for both of us. There's been room up till now. What changed? I honestly forget why I'm in this battle. That's a bad sign!