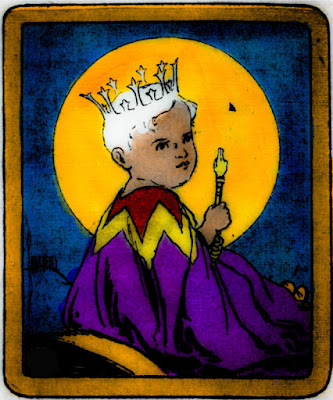 I don't write much about myself, my own life. I guess I've been very modest, since, believe it or not, there would be a lot to write about. But many of the original witnesses are now deceased. And some of these topics appeared to be strictly off limits when they were alive. What were they precisely afraid of, that's something I could never wheedle out of them. My mother would throw up her dress and flee the room.

Still, in the hoary mist that makes up the past -- thick enough to cut with a knife -- there are things about me, and destiny, and about great things that I could accomplish. I dare say would accomplish, but I'm pretty sure everyone's forgotten the prophecies. Which don't just spring out of thin air, but are always something that someone's considered, then hidden in their hearts, then pulled out time and time again to rehearse, then concealed, and on and on like that, all very cyclical, see? Let's say my dad was in on it. He was sharp with an incisive mind; I wonder what he knew!

I got very little guidance on these things. But what wasn't spelled out was hinted about, that I would accomplish certain things, and before that, I would know it when I saw it. Friends, I know nothing. Just a kind of tingly feeling I get when I fall asleep -- or just before falling asleep -- when I'm regaled by, yes, beings, personages, memories dredged up, and revelations even now that are new! This one spirit from the hoary mist, he was hoary himself, hoary-headed, old-fashioned speak for essentially white. White as snow, the purest white you've seen this side of a snow drift.

What would I accomplish? I've accomplished very little thus far. Unless the revelation/prophecy somehow involves this blog. It's weird, I'm telling a story and I don't know how it goes! I'm feeling my way. But doesn't it stand to reason that anything that is prophetic, if it's meant to take place, that it would take place whether I knew what I was doing or not? Like going to the bathroom. Everyone knows how it goes. You do your business, then pull 'em up. Like the kid on the diapers commercial: "I'm a big kid now!"

I could make up prophecies, but that would be artificial, false. I could keep my ears open, and everything I hear try to distill it through a mental process of thinking. I've done that before. Like the time I learned to tie my own shoes. I'm thinking now of ... women! My mother always had female friends. They would get together and do things together. They would talk. Maybe at the lake, on a boat, away from the crowd, among themselves. What were they talking about? She had friends who would live close to her, then move somewhere else. Why did they move?

Seems like a dead end. So many of the folks who attended my birth and early years are dead. It seems, though, that there was something hushed that was occasionally heard, about the obstetrician they had at the hospital, or one of them. How he was always into the hidden lore (or something), how he was thrown out of various churches for his offbeat ideas. I remember hearing some of this, that he was a essentially a mystic obstetrician, and the words "golden child." That's it, I think. Mom and her friend, this one lady -- I remember her name -- had something between them about a guy like that.

I'm going to be working on this from time to time. Freely associating memory scraps with what "must have been." What are the sorts of things people keep to themselves, talking in whispers, acting like they've swallowed the canary? People's mysterious destinies. Like I was meant to have and live, no doubt... I foresee the formulation and using of many techniques. I've long had the conviction, When in doubt, improvise. Act like you know what you're doing. For those reasons alone, and in fulfillment of them, I must be The Golden Child! Yes, I'm certain of it!
Posted by dbkundalini at 8:12 PM