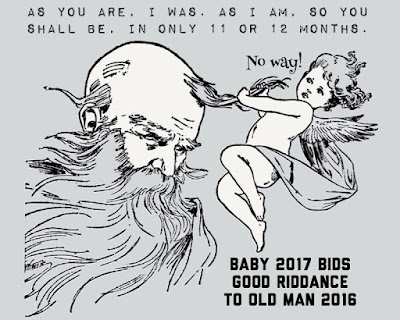 Day 2 of the New Year, I'm not worried. What, me worry? And worry's my middle name. It comes off me like sparks, lighting up the night. But this I'm not that worried about. Day 2? What is there left, only 363 days; this isn't a Leap Year or anything.

A fun project today will be to review the posts of 2016. Usually I might generalize the past year, but with such a small number of posts, there's no reason not to make a few points about them individually. What was behind these posts? Particularly when I was gone for months, then reappeared to post again, only to go back apparently into the Witness Protection Program.

1. Number 1 was coincidentally also on January 1, indicating my usual high hopes. It was called "New Year: Circle the Wagons." This was based on actual meditation techniques, but with a humorous edge, visualizing a circle of wagons at the top of my head, for protection and heavenly provision. As it turned out I never actually did that. Plus I recycled the wagon picture from an earlier post.

2. Number 2, from January 19, was also based on self-help techniques. This time thinking of "A Thousand Years from Now." This post makes a good point. Essentially this, you can have confidence and determination for what you do today, because a thousand years from now it's not going to matter. That's a cool thought, which I'd forgotten about. I'm so concerned about what the next 10-15 years of my life's going to be. But let it go: It's not going to matter in a thousand years.

3. For Number 3 we skip a couple months ahead, March 18, on "Mother's Brewing Company." I remember this. I was at a pizza place near here and there was a Mother's Brewing Company truck outside. I was saying to someone that'd make a good blog post, which I sketched out. We drove away, then I wanted to go back and take a picture of the truck. By the time we got back the truck was gone, so I had to go in a liquor store and take a picture of a beer package. The post was on each member of the family having his or her own brewing company, just like Mom.

4. Skipping ahead next to June 8, we come to "I Can Tie My Own Shoes." I woke up and was putting my shoes on in the dark and was reminded that I could tie my shoes without even thinking about it. I claimed I wasn't bragging, but I think I was, just a little anyway.

5. Now all the way to October 7 for Number 5. "It's Incredulous, But I Believe." I had gotten the song "I Believe" in my head, which I generally hate. This post was an attempt to belittle the song so massively that I would drive the song from my head. That song's a damned curse, and now I'm thinking of it again.

6. The last post was Number 6, "Ug and Craythur, That Old Time Religion." Even looking at it I can't think what the point was. I just thought of the words and was making a big deal of it around the house, and thought I'd put it down and see how it looked. Seemed like it was funny for that one day.
Posted by dbkundalini at 7:27 PM