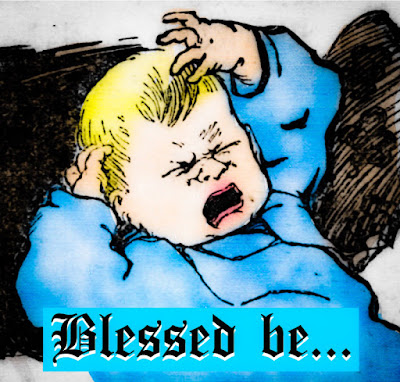 It seriously wasn't till I started looking into the archives of the old Rosicrucian Digest, issues from the 1920s into the '50s, that I started realizing the prevalence of mysticism within the medical profession. There's "Doctor" this and "Doctor" that, a closer study of their backgrounds revealing a predominance of men (at that time) in the baby-making profession, i.e., obstetrics!

This is a great subject for consideration, why that should be. I'd like to know if there are already studies on it, although I haven't come across one. Somehow they've eluded the radar, since nothing automatically leaps out signaling the need or importance of higher things to obstetrics. Recruitment of wise babies to the Order? Hope for a fulfilled life in conferring with babies? It's only a specialist in arcane things like me, who has had incantations and prophecies uttered over him in infancy, who might care.

I think the immediate reason for the connection would be the concept of destiny common to the Rosicrucians. It's no stretch for me to imagine myself, given the skills and position to deliver babies, at least starting out the profession in wonder and awe. Given enough time at it, like most things I've done, I'm sure it would've become rote. Even the thrill of partial nudity wouldn't be enough to sustain me; I'm very easily jaded by routine. Of course the wonder and awe would be connected to the well-being and destiny of the youngsters making their way into the world, having come from where?

Speaking of jaded, it looks to me that we've reduced the excitement of childbirth today to just another thing that happens. Like pouring a cup of coffee or taking the dog for a walk; you've seen it once, you've seen it all. You're checking your watch, which itself gets old. The dog's business is like a birth, but in that case I scoop it in a shovel and throw it into the bramble. I'm sure there are jaded obstetricians who look on the funnier side of life. They're with their fellow doctors later in the shower going, "[Rude comment conflating childbirth and defecation excised.]" Wild, huh!?

Regardless of any of that, and assuming the obstetrician attending me knew at least the generalities of mysticism -- whether he was a Rosicrucian or not -- I have enough hints about him to know that words of that spirit were spoken. Like Simeon in the Bible, "This child is destined for X, Y, or Z, whatever..." The fact that he said anything except, "Congratulations, ma'am, I'm hitting the showers," seems significant. Had he meditated that day? Had something been imparted into his spirit, something akin to the Gospel of Thomas logion 4, "The man old in days will not hesitate to ask a small child ... about the place of life."

It'd be great to be a mystic obstetrician, now that I think of it. If you continually sent the mother to the bathroom while you whispered words of wisdom into the little one's ear, you could change the world, transform life and existence! It's as good and true as mother's milk, but a reorientation in destiny: Milk your destiny for all it's worth! Milk it!

Pardon me as I pause and dance around the room. "The Golden Child's got it goin' on, uh huh, uh huh."
Posted by dbkundalini at 7:35 PM