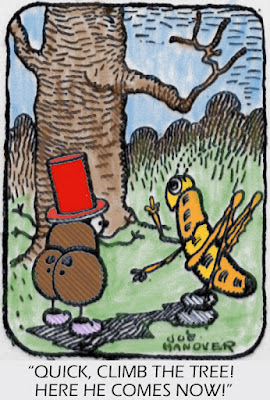 I have come to learn that there's a movie about a guy who becomes a tick. Who then, presumably, goes about fighting crime by sucking the blood from every super criminal he happens to meet. If that synopsis, based on nothing more than my guess, is accurate, then I can relate. That is a true adventure I have experienced, and, fortunately, like the Tick of movie fame, I have lived to tell.

We have some nature trails nearby. I think they're about the best place to walk of anywhere I've ever seen. You can walk miles, and because it's so rough and challenging, with lots of rocks and hills and unevenness, it's always interesting. It's not like walking on a flat place and feeling like it's boring and endless. I can go miles and be sad when it's over.

The best times of the year to walk, I've found, are spring and fall, with winter not being half bad, if you can manage not to freeze to death. We've had some fairly mild winters, so it hasn't been terrible. The absolute worst time to walk is summer, which once upon a time used to be my favorite season. Now I hate summer, wish it'd go away and learn to be more pleasant like spring and fall. But of course it lingers, entirely unwelcome.

Why is summer so bad? Let the Tick tell you, because of ticks, that's why. At the crack of summer, this is true, one day after a walk I noticed a bump on my hips/front area, and pulled on it because I feared the black dot might be what it turned out to be, a tick. One big problem was my walk was a couple days before, so this thing had been there all that time, while I'd showered, eaten, and slept. Quietly munching, sucking, and making itself at home!

I got infected a little bit, though the details are hard to remember now. And whatever reddening popped up wasn't going away, meaning eventually I had to go to the doctor. The doctor gave me an antibiotic or something. After a couple weeks (!) it all faded away and was better. At this point I was less eager to go for a walk, but after a sufficient amount of time thinking about it and making a resolution, i.e., that I would check for ticks more diligently, I was off.

I started driving for the nature trails when something virtually imperceptible led me to scratch my back, around the hips. I'd driven a couple miles from home when I felt something. Since it was around back, I used my phone to reach around and take a picture, which was, yes, another tick! I pulled on it but it wouldn't come off, then I gave up on the walk. I went home and had help getting the tick off. That was it for walking in the summer.

Now, though, through the fall and winter I've been back at it and it's a joy. No more ticks!
Posted by dbkundalini at 1:46 PM