Abraham Lincoln Vouches For Me 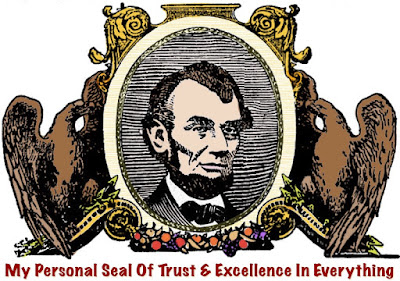 I finally figured out what’s missing at this blog, the one thing that shall transform it from mere decency to stellar excellence. And that's a seal of excellence, quality, virtue, and trust, with my exemplar or spokesperson being Abraham Lincoln.

I always liked Honest Abe, the 16th president (should’ve been first), not only for what he stood for in history but what they taught me in school. In short, when it came to men, he was basically the best they could find. We definitely know, when they found Lincoln, they quit looking. He was the gold standard, the cream of the crop, the exemplar of excellence that could never be topped. The weirdest part being, he never let it go to his head.

Unfortunately, we also know Lincoln was killed by an assassin’s bullet. A few years ago, I listened to an audiobook on Lincoln history, sketching out for me precisely what happened. Some sorry son of a bitch, holding an idiotic grudge essentially over the Civil War, but also harboring vainglory in his twisted mind, did it. With the only redeeming thing being, it wasn’t long till he got his. Burnt to death in a barn like the true rat he was. His accomplices, mostly men but one woman(!), were hung by the neck till they were dead, and good riddance to them.

By the way, the parallels with Lincoln and Kennedy are outstanding, although I can’t remember what they are. It seems Lincoln had a secretary named Kennedy and Kennedy had a secretary named Lincoln, or something like that. Both men liked easy chairs or rocking chairs. Both lived and worked at the White House, located in the same city. The biggest variance is Kennedy was much younger, having been born over a century later.

But enough education for today. Except a personal note: If it weren’t for these guys, mostly Lincoln, but also some our other presidents, I would’ve been absolutely bored in school. But that’s not my sole interest, the educational value of historical figures, although if it weren’t for history we’d be horribly lost. I’d wake up thinking yesterday didn’t happen. But of course it did, and we need to learn the lessons of yesterday. I was at Walmart yesterday and was impressed at their great stock of merchandise and what seemed to me very reasonable prices.

Perhaps the biggest value of Lincoln history — they say it and I concur — is the trust factor. We trusted everything about Lincoln when he was president, and in subsequent years as well. I don’t think it’s an exaggeration to say Lincoln has even increased in terms of trust since he lived and died. It’s definitely a fact that anyone who trots out Lincoln, whether part of their logo or not, shares in his glory, with trust and credibility theirs, and in good measure.

Today, then, my friends, I’m picking up the dropped mantle of Abraham Lincoln, and will be boldly featuring his picture on my blog. I hope to feature it everyday — if I can afford the extra browser ink. With God being my strength, I will. With the only other possible exception being, say, it’s a big news day and I need the space for field reports. But it’ll have to be something big, like an obscene spike in bacon prices or, more hopefully, a reduction.

No matter how that plays out, when you see the picture of President Lincoln on my blog, you can be sure you’re at the one blog you can trust. Because everything I say is true — to the level of my knowledge and whether or not I'm being blackmailed — and everything about me is trustworthy. So this is my seal, this is my bond, the man of the hour, nay, the man of the centuries, Abraham Lincoln.

Wonder if Lincoln had a middle name. Thomas Edison had one, Alva.
Posted by dbkundalini at 9:48 AM