Gorilla Testes May Cause Impaired Judgment 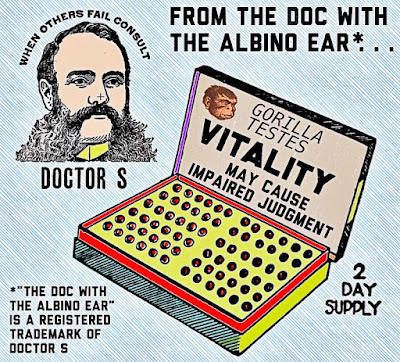 I had something wrong with me -- a dreadful disease or condition -- so Doctor S recommended a few boxes of his own Gorilla Testes Vitality pills. He said it'd restore what I was lacking and help get my normal symptoms back in whack. The pills aren't bad. You merely swallow them, but since you need a half box every day there is some lingering gorilla testicular aftertaste. Doc says that's how you know they're working. But still, it'd be bad to go the zoo and have a lady gorilla catch a whiff of my breath...

Oh, it's terrible getting old and needing outside stimulants! But that's the ingenuity of man, able to diligently study every issue, then extract a cure from the things of nature, in this case the delicate privates of our first cousin in his non-evolved state. Which is better than having to call our actual first cousins and ask for help.

I was reading over the possible side effects, and it was all pretty straightforward. "May cause impaired judgment," which I was prepared to risk. Because when your vitality's zapped, you want help. And you think you'll stay home and get your rest. Take the pills and sleep. But it must have given me new vitality right away, because they're all saying I made a pretty big night of it.

All I know is, I went out for dinner and had a very nice time. I made a lot of new friends when I stood up and announced I was covering the tab for everyone. Then I was also very popular with the waitresses when I tipped each one 50 bucks. I think I can handle the extra charges but it'll be tight. If I make the minimum payment on the credit card every month for the next three years, I'll easily have dinner covered...

On the way home, they're also saying my foot was heavy on the gas. It seems that every cop in town was personally chasing me. What an adventure! I've always been proud of my ability to elude capture, enemies, anyone on my trail. Here in the Big City, though, it's extra easy, with a lot more roads as well as the interstate to dodge capture. But eventually they had me cornered. So I abandoned the car and made my way into a thicket of trees. Anytime I'm in any sort of altered state of consciousness, it feels like I make very fast progress when I run. So I easily stayed ahead of the fuzz till they finally caught me.

Which wasn't till I got all the way back to my place, in my yard. There a cop was waiting and jumped me. I tried to elude him in the backyard and climb a tree, but it was soon over. There was just a tiny bit of excitement left when I managed to yank the gun out of his holster and shoot the brick wall in back. So many chunks of cement were flying, I probably should've had goggles on. It wasn't long till he had me in irons.

There's a guy in my cell called Shivs. And he let me borrow his phone to write this blog. Witnesses said I dropped my own phone in the aquarium at the bar. I don't remember any of that.
Posted by dbkundalini at 8:13 PM