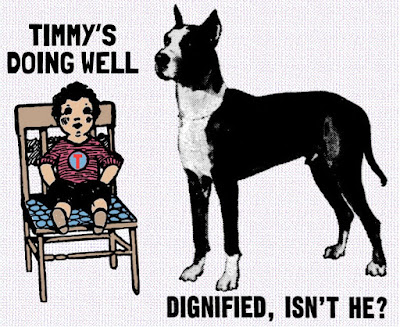 The other day someone reminded me of one of my favorite TV shows when I was a kid. Which was very long ago, making the show an oldie but a goodie. About a boy named Timmy and his dog, whose name isn't coming to me, wait, it's Dane! Thought I had it on the tip of my tongue, but I had to think about it for a minute and there it was.

I was thinking, Was it Digby? Delbert? Great Delbert? I thought it started with a D. The picture I found online said Dignified, but that couldn't be right. I knew right away it couldn't be Dignified. Then Dane came to me. One thing I know for sure, Dane wasn't a collie; my first dog was a collie and they're a lot bushier.

Timmy, though, that's the kid's name for sure. Because I've often heard Timmy mentioned over the years. Let's say he came close to falling in a well. Or came close to being lost in the haymow. I had that happen a few times. One of my favorite activities as a kid, actually, was playing in barns. Haymows feel dangerous. I was genuinely afraid and excited. You're stepping around the cracks of the bales, the hay, and it feels like you could be swallowed up. But no kid was ever swallowed up, not while the dog was around.

Dane could be counted on -- and I'm talking about the show now -- to rescue Timmy before anything bad happened. You might think, That's not much of a show, since you need a plot, you need conflict to have a show. True, there's lots of shows like that. Those are the ones I hated. I never wanted conflict, and yet I didn't want shows to be documentaries where nothing happened. The only conflict I wanted, just for the sake of argument, was this: The fear that something might happen. That was my true life story: Something might happen at any minute, but if I'm smart -- smart and careful -- it won't.

OK, the plot of the Dane show is coming back to me. Timmy's parents would be playing cards with a neighbor couple. The kids would be running wild, although they were good kids. They made up adventures that took place in the haymow, for instance. There was always some danger, but Dane would growl, and everyone would know they were doing something wrong. Once they had Dane's warning -- Knock it off -- they changed their behavior and were good.

Toward the end, everyone would go back to the house, the kids and Dane. The family up the road would throw in the towel on the card game and head home too. Mom and Dad would be wondering how thing were going with Timmy and Dane, and how it went with the other people's kids, and it was always the same: Thanks to Dane, nothing bad every happened. The perfect show.

Dane would bark, a couple of quick barks, his nose in the air, seeking Timmy's Dad and Mom's praise. "You did good!" Mr. Douglas would say, lightly scratching Dane's nose and offering praise, "Timmy's doing well! Good boy! You, too, Dane!" And mother, Jacqueline Douglas, would offer the same sort of praise, said in that soft, sensual purring style that she was known for, "Such a good boy, yes you are, good Dane... Keeping Timmy well!"

Everyone would enjoy an evening biscuit, brush their teeth, and hit the hay, so to speak.
Posted by dbkundalini at 1:57 PM