The Dog Bill of Rights 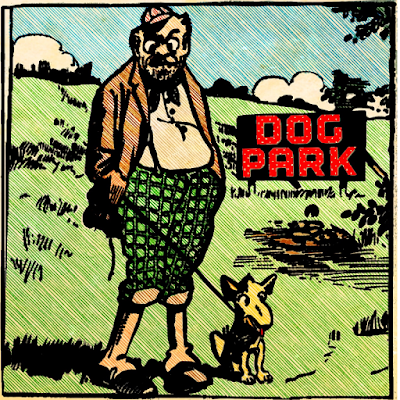 Who among us isn't completely cheesed off at dogs, the way they act, their behavior? It's my constant complaint, that's for sure. Obviously, I'm not ready for the new way of doing things, mollycoddling animals to excess. This bending over backwards to cater to their every wish and desire, it's all too much. They used to put a plate of food on the table for us kids -- we loved food -- and we about killed each other, fighting for every morsel we could grab. If it was good enough for me, it's good enough for the dog; they don't need babied.

Back then and ever since, I've had dogs. I miss the dogs of those days. Grateful for every little scrap, always doing their bathroom duties where they stood. You didn't have to make a plea or say a prayer. Just bang, they went, a grunt or a whiz. Drop and give us a gallon. No questions asked, no prancing, no mincing, no searching for a better spot, no putting it off for later.

Of course I've tried to keep up with the times, and I'm sorry to say, it's not pretty. Every guy I run into, they're also spoiled, because, "I know my rights...," always said in that wheedling, weak, ineffectual tone of voice, how everything's said these days. You see someone like that, if you have any strength at all, you're tempted to put their arm behind their back and hoist it, till they cry bloody murder, or at least come to their senses. I'd be great to get back to that dog-eat-dog world. It'd certainly save time. I grunt, you move! You don't ask why. Here! Now! 50 pushups, mister! Faster, buddy!

But who am I kidding? We know the way it is today. Men, you can push 'em over with a feather. Women, the same old story. Dogs, they're entitled and they know it. The only thing that isn't fully domesticated in modern times is the cat. But they're well on the way, on the couch, getting fat, looking like a pillow gone bad. But there's a cat here in the Big City I know. It's holed up in a basement window with bars on it, taking care of a little cat. Getting snowed on, blown on, rained on. No one helps that cat; it helps itself. I saw it yesterday heading back there and I didn't give it any encouragement. Just turned my head and forgot about it. I got troubles of my own.

That cat's a lot different than my dog. Yes, I spoiled my dog, back home. And now we're in a rougher world, the Big City. So what's the trouble? This business of doing her business! We go out so many times in a day, then she gives me the runaround on finding a suitable place! I think what any disgruntled tough guy'd think: Squat, dammit! We need more panthers, less pussycats. If a panther jumped out and took a piece out of my dog's hindquarters, she'd think twice next time about not pooping pronto! Believe it, that's on my bond.

But she obviously thinks we are going by the Animal Bill of Rights here, even when my brain is crawling like a pie of worms or snakes, and my thoughts are so tortured that I'm about to bust: I got problems of my own, dog! You think I'm personally taking stool softener 'cause I want to? No, I don't dare delay either. When it's time to drop and do it, it's time! Instead, what do I get from her? Another hour in the frigid winter's night... Creepy crawling around town, passing many a good snow drift, looking instead for those rare places where the snow has melted, like manhole covers on the streets, just so she can tinkle or poo poo. Give me a break!

It really gets me. I'm shaking my head even now, hours later! These domesticated animals, so soft, and so thankless, unfeeling, uncaring. They get that bold attitude of "You adopted me, stupid, you're stuck with me!" O, I hate to lower the boom on you, sister, but maybe you've noticed, We're in the Big City now! They do things different here. Part of it's my own survival. I haven't got hours to give you. Guys are coming up the street and going down the street. They'd knife me for a dime. But does the dog care?

Finally, then, she does something. On the fifth time we've been out in the last two hours! Then she looks at me like it's accomplished, time for a treat! The attitude really sucks, my dear! How about this, you scratch my back, I'll scratch yours. Do the task with the urgency it demands -- Drop! Go now! And back in! -- and maybe I can see my way clear to lay a little treat morsel on you. Yeah, that's how it works. Makes more sense than, "I wasted two or three hours of your time, risked your life for the effort, and finally passed a small one. Give me a big treat..." It's sickening, I'm waving it off...

The only thing she's fast with is the false claim that she's ready to go out. I know how it is, the psychology. The more she demands, the more I give in. But this is the Big City! We used to live in a little burg that lulled us into a slumber, with no fear of security. And she hasn't made the shift, out of ignorance. If only I could be that blind to the environment! To the times.

Well, one of these days, my dear, you'll get yours... So sleep on, little one, take your rest. May as well not wake you. Too late to change your attitude from uncaring to hair-on-fire. Too late to go from soft as Grandma's underarm to tough-as-nails, nail tough... Just know this, when the wolf comes knocking at the door, it's you he'll be looking for.
Posted by dbkundalini at 12:32 PM