Was The Lunch Lady A Hag? 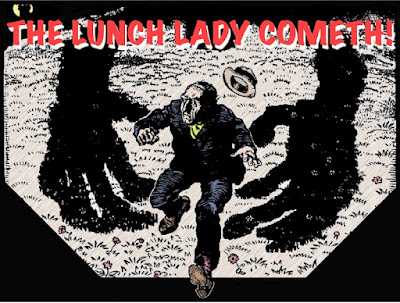 I had an unfortunate run-in the other day with a couple of friends from childhood. You always think it’d be great to get the old gang together, then you know it’s a disaster when you see them more than five minutes. But having my home base right there in town — when I’m not in the Big City — such run-ins are guaranteed unless I'm in disguise.

Flashback, these guys were the terror of the lunchroom, holding sway over all, and once battling the lunch lady royally for something like four days straight. Sometimes I'd be at their table, sometimes not, depending on what note I had or didn’t have from my mother. Me, though, I thought of lunch as a time to eat fast and get outside, not something to get in trouble over.

OK, the talk in this recent meeting focused on whether the lunch lady was a hag. Benny said she was definitely a hag, the very definition, and even alluded to a particular edition of the dictionary, without citing it specifically enough to verify his claim, that her picture was published adjacent to the entry "hag." I waved it off, but he was willing to swear on a stack of Bibles (of any publisher) that it was so.

Be that as it may, I’m a grown man, I’ve put aside childish things. I don’t even think calling people hags (for the sake of argument let's say lunch ladies are technically people) is even a thing we do anymore. Now, today, supposedly, there's a more enlightened way of dealing with people. They're considered to have the same dignity as everyone else and should not be diminished in any way with terms that detract from their full value as members of collective humanity. Or something.

It is true, however, that one guy can be a real bastard or one lady an obvious bitch, etc., and if we’re not willing to call a monster a monster, then we’re dishonest. There’s good people, there’s saints, there’s bad people, there’s evil seeds, there’s dipshits, morons, dweebs, and losers. All, however, with each one having the full value of human beings, even if they have gone off the tracks for some reason — stupidity, lack of insight at the chromosomal level, or something about the inner person being soured and them being consequently rotten to the core. But I don’t want to make this political. A decent guy like me could get killed by some of the halfwits, morons, and losers we see these days. I will stay out of that all together, except for the bitching I do in private with other decent people.

Anyway, I did my best to steer my old friends (losers in their own right) away from dehumanizing language like “hags.” I don’t think Mrs. [lunch lady] was a hag, no sir. Was she thoroughly the wrong person for the job of lunch lady? Did she miss her true calling of lion tamer? In our modern age, would she be charged with child abuse? That’s an interesting question. She might've avoided charges because she was slippery. But back then we didn't have video surveillance. So she could get away with the despicable defense of, "Who do you believe? Me, the responsible lunch lady, or a whole gym of irresponsible halfwit eyewitnesses?" I'm sure she had lots of bad days, but did that make her a hag? There was a lot of pain in her withered soul, but “hag," I won't go that far.

So I offered excuses for her: 1) She was popping pills and that would obscure anyone's judgment. 2) She had friends who were also lunch ladies, but they served more prestigious schools; her bitterness of spirit was compensation. 3) The hairnet she was forced to wear was much too tight, constricting blood flow to her head, making her semi-wacky.

But my old friends couldn't see anything past the starkest black or white. The lunch lady was a hag, a bitch, in short, a despicable troll, rotten to her withered core with no redeeming qualities that could ever lead her from the world of the hopelessly lost to the new world of politeness, etiquette, and beauty that we share today. I had to get out of there and quick. Another five minutes and we would’ve been pissing on her grave. And my time’s valuable. I'm not running across town when the bathroom's only 20 feet away.
Posted by dbkundalini at 2:27 PM