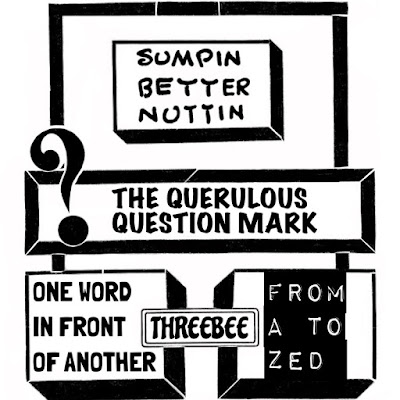 I like that big rugged question mark (above), the dot big as a tire, the curves dominant with confidence. There’s no doubt I’m asking a question, to the point with edginess, even elegance. Asking boldly, couched in fearless determination. Prying into your precious business — perhaps — or asserting the question with such insistence, if you don’t answer, the next time it's gonna be in your face. I tried it the easy way...

My way of asking, though, is rarely edgy. But more like, “Hey, I asked, it’s OK if you say no,” stopping just short of being miffed or querulous. That's a good attitude in my opinion, because at least I asked. And whoever the other guy is, The right of first refusal might just be a refusal. And if I’m ill-tempered, I can keep it secret.

But is this a day for being fractious, cantankerous, or liverish? Liverish? Don’t think I’ve heard that word before. I might adopt some of these words into my everyday vocabulary. Someone asks me how a third person was, and while I can’t speak for the third person, I can address the issue of the third person's apparent state. “Friend, the third person was liverish, or should I just blabber a more common lingo and say she was sour, bilious, and dyspeptic? Time fails me to mention choleric or splenetic, although I do have just time enough to fit in scratchy.

Are those words good words? A question mark like that hopes the answer's yes. Does my question mark convey that degree of snottiness without coming right out and saying it? Careful how you answer. It could be bad news.


One Word in Front of Another

Looks like a theme today. Words in front of other words, in other words, words, words, words, for what they’re worth. Ask Wordsworth, he can tell you what a word’s worth. There was a word in the beginning, the word says, and there’s a moment of silence in the end, then they lower the boom. And boom might've been the first word, the Big Bang. Trailing off with the OM.

My very first words as a kid — and I have actual documentation on this — were get (git) and mama and dada. I don't remember it firsthand, but when a baby says GET it means something I want. Acquiring something with which to start my collection, or a down payment on my next meal: “Reach over and get me that box of chocolates.” Which explains my present-day bad teeth, too much getting of things I shouldn’t have been getting into.

In a way I miss those days of obvious unconsciousness and growing consciousness. What do any of us know at that age? We’re not as experienced as now when we want something. We want it, we may get it, we may not. Just saying “Get” to Mama or Dada comes with the possibility of them saying no. And then I’ve got another word: “No? Excuse me. Why’d you even give me life if all you want to do is say No.” Then I throw the back of my hand against my forehead, lamenting, “If I’d known how cruel life was I never would’ve been born! Thanks, Mama and Dada, for nothing!”

The honest truth of the matter is, I didn’t speak to my parents that way. More que sera sera. Yes, I got in trouble for things, and we had disagreements. But 'nuff words. That day was a day for learning.


From A to Zed

Here’s one I didn’t know the details of. Why the British say Zed and Americans say Zee. We need to defer to the English on this one, since it is English. Although this is one where I have the inside track, since a bunch of my people were English. I haven’t taken the DNA test, but others have, and online genealogical information bears it out.

We used to have a pool table when I was growing up and I even did the billiards version of English, never content just to poke the ball in the default straightforward way. I’d spin the thing from below, which meant it jumped back in my lap several times. I polished my knuckles for the achievement. Or I'd use English on it from the top, and I think with that one it stops when it hits a ball.

Anyway, I’m an English speaker by genetics and upbringing. But no one ever cleared it with me this business of saying Zed for Zee. It sounds weird, but, hey, it’s just one letter off. Hard to figure, though, how one little letter makes it sound so prim and proper, even high falutin’. You might see me with my teacup and my little finger out at the same angle as my lifted shoulders. Keeping a stiff upper lip and all that poppycock, guvnor. Harumph!

Eating my pigs in blankets -- right, mate -- keeping my nasty little piggies warm, my piggies in heat, the whole sloppy farmyard abuzz (a couple zeds in that buzzard), and a big old piggie — a damned boar over there with balls the size of Texas — honored to bear the distinguished, historic name Winston Churchill.
Posted by dbkundalini at 12:56 PM