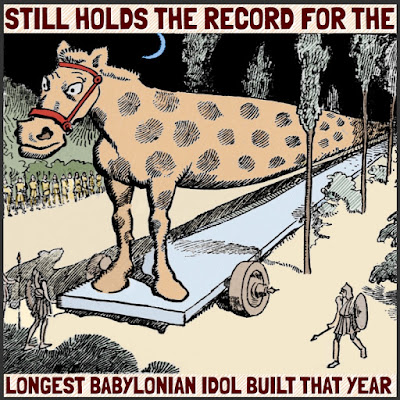 Remember the stories of Babylon and idols from church? I sort of remember them, not the nitty-gritty details. Somehow the details have evaporated or there never were many. But I do remember the basics, that idols are bad and not having them is good.

It was even one of the basic commandments — out of 10 or 20 — having no idols. Then later you find out that the idols weren’t always just statues, but whatever you may have been giving your life over to. Too much bubble gum or roller skates or anything that kids happened to do. When you’re a kid, of course your sins are never too serious, although I shouldn’t say that because these days kids can go hog wild and take out half the school. Thankfully it's only a few times a week, a tolerable risk.

But the idols back then that everyone wanted to destroy would actually be worth quite a bit of money now, and not just because they were gold or had gold on them, but antiquities with historic value. I went to a museum years ago and saw some of this stuff, which if the Sunday School teacher had her way would’ve been immediately melted down and made into thimbles, or pretty pins for the ladies to wear on Sunday morning. Same gold.

I wish I would've known more about it back then so I could've spoken up for the antiquities market, history, and the value of other cultures. But my objections wouldn’t have been appreciated. They had us over a barrel because of our great ignorance, when not one of us uttered a peep that showed any intelligence. Just listen to the lesson, maybe get a sucker, then go home and watch cartoons.

I'd like to think we were all wrong. That these enormous golden cows really were the pipeline to heaven but we were too stupid to know it. If only we had our own golden cow -- and I did live in a place that had a lot of cows -- the whole world would know the cycles of life. A cow lives such and such long. People live this longer period of time. Therefore, yes, God loves people more than cows. But if you make people statues it's always going to look like someone. And you don't want worship to go to that guy's head. But if it's cattle, cattle don't care as long as they can graze in the grass.

So let's look at the specs, the longest golden cow stretched five blocks, about a quarter mile. The only thing greater than the cow itself was the wagon they needed to hold it. Try building a wagon that big, and all the wheels you need to support it. And if it makes you feel better — and I’m interested in this point as a student of weird events — say there was an earthquake, and everything was rumbling like crazy, tilting everything, the greatest confusion, when the earth literally split right down that street, toppling the golden cow, and fortunately or unfortunately crushing the Babylonians, wiping out 50,000 of them.

Yes, that’s a lot of people for one cow. But look at the cow, they made it themselves, it’s super huge, and it crushed them. Be careful for what you wish for. So it's kind of tragic, but no matter. It was a long time ago and they would've died of something else by now anyway.
Posted by dbkundalini at 6:00 AM