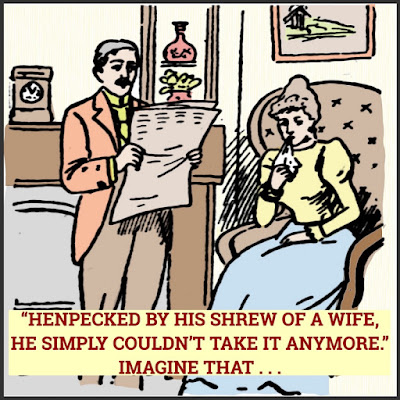 Part 5 of 31
They Found Another Body

There’s always degrees of happiness and sadness in comparing your own life to that of someone else. It's not usually a good idea if you can help it. And usually we can't.

It used to be that neighborhoods had a lot of consistency, stability. The same neighbors there for decades; they just evolved in place from spores. Of course the kids always moved eventually, even if it was just to the attic. This is probably still true in little places where there's no market for houses and no one remembers why anyone ever moved there. In the Big City, though, people are coming and going at all hours, a different pickup truck every morning. Where the previous residents go, it's not always good to know.

The guy in the illustration is reading the newspaper just like I read it. Except I shake it a couple times to straighten it out before saying, "Hmm, another tragedy. They Just Found Another Body Somewhere." Lying in the woods, crushed by a train, hanging in a dump site, or tied in the ditch. But nothing is as common as finding someone in the river. It's weird how I did a lot of fishing in years gone by and never saw one body. I remember going fishing with my dad and there was zero trauma. Now you show up and the first thing you see, There's somebody! Even the fish are huddled on the beach waiting for the cops.

It spurs some thoughtfulness for the guy when another guy bites the dust from mistreatment by his shrew of a wife, henpecking him to such a horrible degree that in the end, that's the end. Then dot dot dot. A different day, it might've been different. They might've found him by the chimney flue of the outhouse at the state park, a terrible place to find someone when he's got to go. He should’ve taken her to court and divorced her when he had the chance, and I'm no fan of divorce. But it’s better than messing with state property, ruining our outhouses.

“Imagine that…” Indeed, imagine that. We can hear his tone of voice. We also see the signs of reflection on the henpecking wife's part, ‘Am I really that bad?” Yes, Missy, you shouldn’t have done it. Greg was working as hard as he could to provide this love nest for you, and this was the thanks he got... Normal talking and conversation along with being constructively critical, to a certain extent, as long as you have affirming solutions, is one thing. But if it's nothing more than nag, nag, nag, dragging him down, pointless criticism, never grateful, carping, sniping, never happy, always riding him, detracting, cutting, nitpicking, bristling, the voice of constant ire, nasty asides, throwing things, muttering under your breath, and of course complaining, that's what everyone hates, and one other thing we hate, having a brother having to live through it...

OK, the marriage was never that great. And now, after her unfortunate demise, the guest room's open for renters. You can read about it in the paper. But remember, the newspaper you read could be the newspaper that sinks you. And imagine the headline the next day. Avoid the news, you're always happier living in ignorance.
Posted by dbkundalini at 6:00 AM