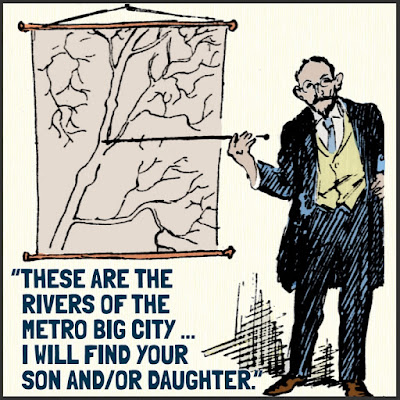 Part 30 of 31
They Found Another Body

Rivers really are great things, no matter how toxic they appear to those who come in contact with them in the course of being dumped by criminals, or those unlucky enough -- alcohol? -- to find themselves thrashing and dying apart from crime. It's a bitter thing that what was set before us as a great blessing — rivers, the channeling of water, water accumulated, a good home for fish, turtles, frogs, etc. — is so often a heartbreaker for people.

Naturally it didn’t have to be that way. Humanity could’ve found better ways of dealing with the river, going for safety and security. Huge fences. Guards posted every hundred yards, etc. Personally, I'm a big believer in the buddy system, which makes us responsible for one another. There's a big difference between that and going it alone. If you're bobbing and about to go down, at least there would be a witness.

But we as a species had a choice and blew it. The good news, the silver lining, being this: You can always do it differently starting whenever you like, now! We shouldn't be making the same old mistakes as if we haven’t learned a thing. Of course not everyone who goes to the river alone ends up dead. I actually like going to the river alone. Fishing, reading, whatever, and so far I’ve always come back alive. The real lesson might be as easy as be more like me.)

There are times though when bad things happen. You’re at the river and just happen to meet up with a murderer. He’s not doing anything so he murders you. And throws you in the river. I'm thankful that's never happened to me, knock on wood. Must not have happened to you either. We, apart from our brothers and sisters who’ve had bad luck, are the survivors. Could they have survived too? Yes, had they not been there, or had they been like me. Everything seems to come down to this: If you have no business being there, stay the hell away. Let your sad ending be a lesson for the future.

Now I live in the Big City. Back when I used to go to rivers I lived either in a small town or something other than the Big City. Which isn’t to say the Big City is crap. But there’s a lot more desperadoes in the Big City, each one looking to carve another notch on his belt in honor of you. He reasons it out like this, “I’m killing all the people I want and just hope my belts hold out." This is why I have not yet gone to the river in the Big City, and probably won't.

Let us turn now to our friend with the map, pointing his big stick to the rivers of the Big City — which is a very helpful map; I’ll take a photo of this with me next time I go to the river just in case I get turned around. This guy evidently has a nose for news, knowing about our various sons and daughters who’ve been lost in the river, and an interest in bringing them back. I think he deserves our thanks. Because whatever grief we're facing, it could've been worse without him happening along as he did.
Posted by dbkundalini at 6:00 AM