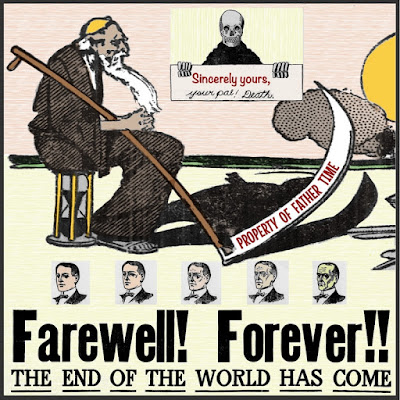 Part 6 of 31
They Found Another Body

In preparation for this series, I devoted myself to going to 30 funerals, done on a daily basis, skipping Sundays. I haven’t used any of the inspirational words that I got from each one, seeing all that as a precious bit of comfort for the families, and personal, no matter how obviously it's just a lot of jawboning fluff. Yammer yammer yammer.

Today is the only day I’m going to refer to these gatherings, mourning the dead, comforting the afflicted, the sad, and the often-impatient wanting just to get it over with. I went to the final goodbye ceremony for this guy, who will go by a fake name today so as not to further agitate the family. I’ll call him Yon Quith, no relation to Yon Q. Public. But of course the Quith family is a big one, rivaling the Public family, Quith being one of our main names. Unfortunately, though, because they "had something better to do" or out of some heinous grudge they have against their own, most of the Quiths weren’t there, but a representative sample of brave souls, holding their nose, still made for a decent showing for the deceased.

You see Yon above in the panel of undoctored photos, that he started early manhood with a youthful appearance and good color. By the end, though, he’d withered substantially and lost his natural color, taking on something of the hues and tones of the Incredible Hulk, green but not with envy. I can’t think what it is that causes people to turn green, too much copper, not enough parsley root, something, bile in the liver. I hope he did something for it, medicine at the very least, Quith Bros. Cough Drops, Trade and Mark, cherry, licorice, anything but lime. He was green enough.

In addition to liver problems, the other disease that took him away goes by the generic name of Old Age and associated conditions. I myself am well beyond my teen years, and the things of Old Age, generis degeneris has me degenerating at a pace commensurate with my calendar age. I’ve been able to avoid the hospital so far, being one of those guys who’d rather die at home up until the pain is too great. At which point, hopefully, the Angel of Final Mercy will leave the Quiths and the Quones long enough to take care of me. But I’m really in no rush. I need to outlive my dog.

Mr. Quith here has the full range of things that accompany a good death. The appearance of Father Time himself, an old favorite from New Year’s Eve when he’s freshly born, pictured here in one of his guises, the old man from earlier on Dec. 31. My grandpa used to have a bunch of scythes like that for cutting weeds, so I grew up wielding those. They look scary to the average guy but they’re a great comfort to me. Then there’s a mailed-in poster card from Death himself, someone I also know. Really, the only stranger here to me was Yon himself, and the way they described him he would’ve been a heck of a guy to know. Started a business, hired a bunch of people, sent birthday cards to their children, etc. A real suck-up, but they’re still sorry to see him go.
Posted by dbkundalini at 6:00 AM